The traditional Women’s Top Volley International tournament will be running in Basel through December 27-29 with a total of six teams from Europe and South America set to deliver world-class Volleyball right during the Christmas festivities. 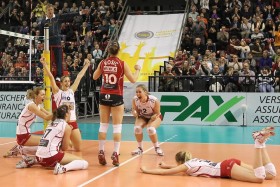 Last year’s winners of Volero ZÜRICH will have a very demanding task as they have to cope with the challenge brought by France’s RC CANNES, club world champs Rabita BAKU of Azerbaijan and Unilever RIO DE JANEIRO.

Volero sees this tournament as a very good test for the remainder of the season.

“This is a top-class event whereby we can play tough matches right after Christmas, so that we can keep the good rhythm we have been gaining through the national league and the European Cups” says head coach Svetlana Ilic.

“This is much better than to have a training session in our own gym and apart from this, we definitely want to retain the title we seized last year” adds the Serbian-born mentor.

In 2010 Volero took the title by beating the Brazilian champions of Volei Futuro 3:2 with a break of only 30 minutes between the semi and the final match.

Free entrance is foreseen by the organizers in Basel and several TV stations will be broadcasting the matches live in their respective countries.