Switzerland: Support for the candidacy of Dr. Ari Graca

Lausanne, Switzerland, December 21, 2011 - The President of four out of the five Continental Volleyball Confederations that belong to the International Volleyball Federation (FIVB) have agreed to support the candidacy of the Brazilian Dr. Ary da Silva Graça for the Presidency of the entity for the period 2012/16. 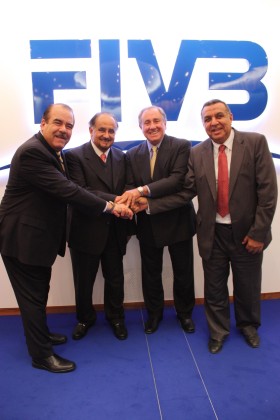 Support for the candidacy of Dr. Ari Graca

These Continental Confederations gather 220 of the National Volleyball Federations of countries represented at the FIVB.

FIVB’s next Congress, to be held in September 2012 in the USA city of Anaheim, California, after the end of the London Olympic Games will chose its new President.
After the agreement, the continental leaders met with FIVB President, Mr. Jizhong Wei and advised him about their decision to support Mr. Graça, who has been the President of the South American Volleyball Confederation since 2003 and President of the Brazilian Volleyball Confederation since the year 1997.

The Presidents of this four Confederations praised the great work of this Brazilian Volleyball men, as the ideal person to lead the FIVB for the new period and engaged themselves to work together to ensure equity and equality of chances for all Continental Confederations when taking decisions at the FIVB, equal participation at the different working committees and over all, the equity participation of the teams of all the confederations at the world competitions organized by the FIVB, with the goal at the same time of guaranteeing the development of indoor and beach volleyball all over the world.

Italy: Good training with Reggio. Manià – Time to step up

FRA W: Vannes with another American