Ceske Budejovice, Czech Republic, January 11, 2012. Bre Banca Lannutti CUNEO got its revenge tonight in the Czech Republic for the home defeat suffered in late October by edging Jihostroj CESKE BUDEJOVICE in three straight sets (25-18, 25-22, 25-21) in only 74 minutes of play to keep the leadership of Pool D and virtually qualify for the Playoffs 12. 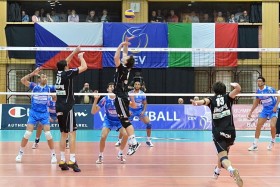 The Italians showed they had totally forgotten the previous defeat and easily controlled the game.

The home guys fought bravely but looked nervous and could score only 18 points in the opening set.

Bre Banca dictated the tempo of the game also in set 2 and although Jihostroj stayed close, still a serving error of Stepan Smrcka sealed the final 25-22 for the Italians.

Jihostroj got a good contribution from setter Filip Habr and opposite Radek Motys who joined the game in the third set but even though they were cheered by 1’880 fans, still they could not stop the march of Italy’s heavyweight.

“We had taken our lesson from the previous match and deservedly won tonight” says CUNEO leader Wout Wijsmans.

“We did not put enough pressure with our serves and made a lot of mistakes” says home middle blocker Radek Mach.

“CUNEO played better than they did in Italy”.

“We had to take many risks and this caused a flurry of errors” concludes head coach Jan Svoboda.

CEV CL: Eczacibasi does not stop the amazing run of RC CANNES

CEV CL: VfB FRIEDRICHSHAFEN has nothing to...