Kazan, Russia, January 11, 2012. Russia’s Dinamo KAZAN downed this afternoon Atom Trefl SOPOT in straight sets (25-21, 25-16, 25-23) to re-assert its dominance in Pool C and with one leg still to go the players from Tatarstan will anyway finish atop of the standings. 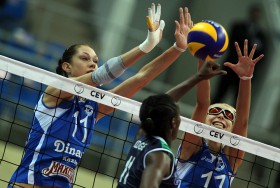 Dinamo set the pace in the opening set (19:15) before SOPOT drew level at 20 all via the serving of Margareta Kozuch and the outstanding defense of libero Paulina Maj.

However, a few good blocks paved the way for Dinamo that eventually sealed the final 25-21.

Atom Trefl played well in defense in set 2 but lacked consistency in attacking and serving, so that Dinamo broke away with the help of Maria Borisenko from the serving line (18:15, 23:15) and finished it quickly for the provisional 2:0.

SOPOT went up 13:10 in set 3 with the killing spikes of Ewelina Sieczka before Dinamo got back on track and three consecutive aces of Japan’s Megumi Kurihara set the tone (19:15) for a 3:0 win.

Ekaterina Gamova paced Dinamo with 15 points while Megan Hodge scored 13 for the guests.

“It is always difficult to play with teams that have a good defense like SOPOT” says Russian libero Ekaterina Ulanova (Kabeshova).

“Anyway, it feels great to be atop of the standing and I am glad we qualify for the next round as first ranked team of our group”.

“We played against one of the best teams out there, equally for some moments, but too many mistakes from our side influenced the final result” says Alessandro Chiappini, the head coach of Atom Trefl.