Dresden, Germany, January 13, 2012. Germany’s DRESDNER SC and SCHWERINER SC were not able to contrast their strong opponents this past Tuesday as they joined the fifth round of action in the prelims of the 2012 CEV Volleyball Champions League – Women. 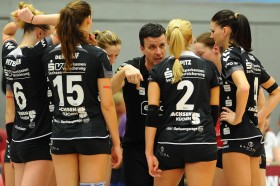 Busy schedule for rookie DRESDNER SC after journey to Baku

DRESDNER SC lost to 2011 club world champions Rabita BAKU in straight sets but in spite of this defeat the rookies still have a chance to make it to the 1/8 finals in Europe’s most prestigious competition.

DRESDNER SC will play Fenerbahce Universal ISTANBUL, another world-class opponent, next Tuesday to complete the prelims and before challenging that powerhouse has also one game in the Bundesliga against VfB SUHL.

Head coach Alexander Waibl reviews the match in Baku and takes a look at the preparations for the next match in the national league.

How would you review the long and energy-sapping journey to Baku?

Each match in Europe’s top competition is a precious experience for my team, to test our likes against strong opponents as well to understand and know the culture of other countries.

The fast development of Baku is impressive.

We played against one of the strongest teams in the world thereby getting some valuable experience.

You lost straight in three sets.

Are you satisfied with the performance of your team?

Our club has been participating in three different competitions.

Even if we couldn’t make it to the semifinals of the national cup in December, my team is still ranked 2nd in the German League and we have still good chances to make it to the 1/8 finals in the Champions League.

This is fantastic. But this also means a full schedule for the girls. We’re playing nine to ten matches per month. So it’s really difficult to find the right balance between training and recovery. That is why a few players had the chance to recover and the other girls trained more intensive than usual. Therefore we hadn’t totally recovered for this match. But we showed the best performance for the level that we can display at the moment.

What are your goals for the last match in the league round of Europe’s top competition?

We want to take the chance to make it to the next round, we have already played against the two strongest teams in the prelims so we could get a good draw for the 1/8 finals.

You’re going to play against VfB SUHL on Saturday. How could you prepare the team for this match after the hard journey from Baku?

There won’t be a special preparation for this match. Even if it’s a traditional derby between both teams, this match will be one normal match on the way to the Playoffs.

My players could not recover as they should. We had one athletic training session right after our arrival in Dresden and then they had the day off.

On Friday and Saturday we will get back to the usual schedule: practice, video preparation.

Your team will maintain this full schedule also for the next weeks.

On Tuesday we play against Fenerbahce Universal ISTANBUL at home.

We travel to Wiesbaden on Wednesday, because we play again in German League on Thursday.

There will be a lot of exciting matches in the next weeks and we’re looking forward to it.