The 10th round in Greek Volleyleague did not finished because of the game between Finikas and Lamia which is not scheduled yet. 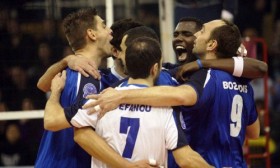 In the other games Iraklis Thessalonikis was the big winner of the round by managing to take a clear win in Athens against Olympiakos.

In Alexandroupoli the local team of Ethnikos won with the same score 3-0 the game against EAPatron.

Except the usual suspect Mark Dusharme who scored 17 points Jernej Potoncnik was amazing scoring 16 points with 75% in excellent attacks and 2 blocks.

Iraklis Thessalonikis backed up its chances to advance to the Playoffs 12 of the 2012 CEV Volleyball Champions League by winning 3-1 against CSKA Sofia.

After the game the coach Sotiris Drikos stated “We claimed a very important game and we now have the last match with Noliko MAASEIK next week.