The XXXIII CEV General Assembly was officially opened on Friday afternoon in the splendid premises of the Congress Centre situated in the European and financial district of Luxembourg City by CEV President André Meyer. Read the latest news from volleyball world on worldofvolley.com. 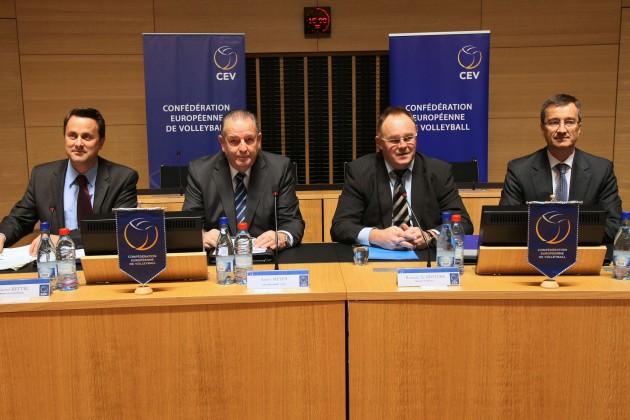 “After a few years the CEV General Assembly is returning back home as we get together here in the Grand Duchy of Luxembourg for the first time since 2006. Since that time our Confederation has undergone some major changes, expanding its activities and asserting its role in the daily efforts that are being made to support the development and promotion of our sport also on a worldwide scale” said the CEV President. “My annual activity report will provide you with more details about the current state of Volleyball in Europe but even though we can proudly look back at the past months and years, we still would like to focus on what is next, hoping that the best for Volleyball is yet to come” he added.

“I have the feeling that this Congress portrays our current attitude and approach: we can look back at the past achievements with much pride – and in doing so we will also honor some Volleyball personalities who will be appointed CEV Honorary Members for their continuous contribution to our success – and, at the same time, we want to stick to our intention not to slow down the pace in order to bring Volleyball closer to the young generations and to stimulate the involvement of all those who may well contribute to an even more successful future” stressed the CEV President.

Europe’s Volleyball authorities and the delegates of the 47 National Federations in attendance – with six more represented by proxy – were then addressed also by the Mayor of Luxembourg City, Xavier Bettel. “It is a real honor for me to welcome you to Luxembourg, a city and a country that probably most of you have traveled to for the first time. You have realized, I hope, that this city and country are much more than a bank or a saving account, and would certainly love you to have a look around and enjoy what Luxembourg is able to offer in terms of history, culture and traditions”. The Mayor also recalled his special connection with Volleyball, the sport he did enjoy the most at school and additionally drew the attention of the delegates to the great venue of the General Assembly that normally plays host to meetings joined by the Prime Ministers and Heads of State of the EU Members.

The President of the Luxembourg Olympic Committee, André Hoffmann, also enjoyed the opportunity to greet the delegates. “We are very grateful to André Meyer, whom I worked with by the time he still chaired our Volleyball Federation, because with his work he has definitely contributed to the massive development of this sport. The Grand Duchy will be hosting next year the Games of the Small States of Europe, with Volleyball being quite understandably included in the program of this multi-sport event. In a sport where for a small country like Luxembourg it is very difficult to claim good results, we can be proud that we are being so well represented in terms of general management and in a decision-making process whose effects are to be felt worldwide”.

Lastly Luxembourg Sports Minister Romain Schneider recalled that Luxembourg was already under the spotlight of the Volleyball family five years ago as the final round of the women’s European Championship was held in the splendid scenario provided by the local sports centre, more known as d’Coque. “This time Europe’s Volleyball family has come together for less sportive purposes but still I assume that the decisions that are to be made here will definitely influence the progress and development of the sport for the years to come”. Mr. Schneider shared some memories from the time the European Volleyball Confederation had moved, more than 20 years ago, from Brussels to Luxembourg thereby being the first international sports federation settling down in the Grand Duchy.

“Currently we have got three international federations who have found their home here, with the CEV joined by Europe’s governing bodies in table tennis and swimming. Somehow CEV did set the tone for more federations to follow and settle down in Luxembourg. The government of our country is very much looking forward to welcoming more sports federations with the ultimate goal being to turn the Grand Duchy into a home for the European sports family similarly to what has happened with the EU institutions. As the CEV recently bought its premises in Luxembourg, we are extremely glad to see that we will be hosting Europe’s Volleyball family also in the years to come so that Luxembourg will enjoy a unique positioning in the global sports arena”.

After the official opening, the Assembly continued with the approval of the minutes from the previous Congress held last year in Vienna and with the CEV President discussing a detailed report summing up the many activities and projects implemented in recent times by the CEV to foster the growth and development of Volleyball across Europe.

Lastly Mr. Meyer shared with the delegates the result of the appointments recently made by the FIVB for the various institutional bodies (Commissions, Council, etc.) that will be governing the international Volleyball arena in the next Olympic quadrennial. “Europe is well represented in all organs and I think we can be very proud of the positions we have been appointed to thereby contributing to the development of Volleyball also worldwide, sharing our knowledge, skills and being ready to support all other Confederations and anyone who may well need our help”.