This past May the CEV had entered into a partnership with the Special Olympics Europe/Eurasia in order to create more opportunities for athletes with intellectual disabilities. Mr. Pierrot Feltgen of Special Olympics Luxembourg was invited to join the XXXIII CEV General Assembly. 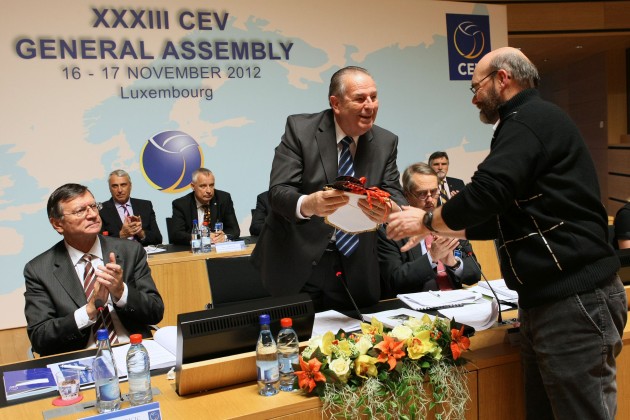 Mr. Feltgen used this opportunity to recall the genesis of SO that was created back in the ‘60s by Eunice Kennedy Shriver, the sister of the late JFK, with the ambitious goal to create a better world via the acceptance and inclusion of all people. The Special Olympics are responsible for organizing a series of competitions all-year round in almost all Olympic sports, doing so as they work specifically with children and athletes with intellectual disabilities. Such events stand out for the atmosphere of joy and spirit of true friendship that brings together not only coaches and athletes, but also their families and friends.

Volleyball has gradually turned into one of the most important development areas for Special Olympics Europe/Eurasia and the sport is evidently included also in the largest festival that is held under its authority, namely the European Games whose next edition is scheduled for 2014 and that will take place in Belgium, namely in the cities of Brussels and Antwerp.

The partnership signed with the CEV is one of many similar actions already implemented by SO Europe/Eurasia, with Volleyball following the trend already set by other sports, such as athletics, gymnastics, tennis and many more.

CEV President André Meyer followed up on the detailed report provided by Mr. Feltgen to invite the delegates to work closely with their respective national divisions of SO in order to provide athletes with intellectual disabilities with the necessary assistance and more opportunities to get involved in the sport. Finally, Mr. Feltgen presented the CEV President with a special souvenir, some red laces that shall testify the close cooperation and bonds that unite CEV and SO.