General Assembly on its way with detailed reports from all Commissions

The second working session of the XXXIII CEV General Assembly was opened on Saturday morning by CEV President André Meyer with a total of 48 National Federations. You can read all relevant news from volleyball world on Worldofvolley.com. 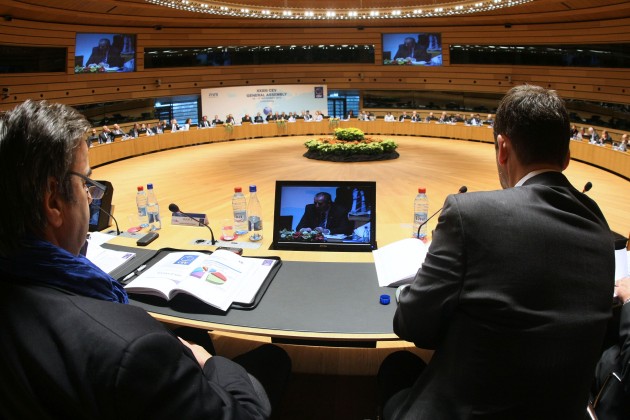 The Presidents of the various Commissions continued their reports, with Aloys Fischer stressing the involvement of the European Legal Commission in an ambitious project whereby the various regulations for Volleyball competitions shall be unified to finally work out comprehensive Sports Regulations.

Prof. Dr. Manfred Holzgraefe who chairs the European Medical Commission (EMC) drew the attention of the audience to the intensive anti-doping program carried out by the CEV whereby 255 tests were performed this past year to make sure Volleyball will remain a “clean” sport. A good confirmation of the healthy state enjoyed by the sport stems from the fact that no athletes were eventually tested positive for banned substances.

The EMC is also responsible for accrediting medical doctors and physiotherapists traveling alongside the various national teams and clubs competing internationally across Europe. The figures are really impressive, with 87 doctors from 25 countries and 270 physiotherapists whose credentials and skills have been duly checked and analyzed by the EMC. Lastly, the EMC also continues its work in checking the physical condition of all international referees thereby making sure that they can duly perform their tasks and contribute to the success of the Volleyball and Beach Volleyball events placed under the authority of the CEV.

ESOC President Pierre Mulheims stressed out the great figures registered in the last editions of the various European Championships which were joined by a record-breaking number of NFs.

He also anticipated the flurry of major competitions coming up next year with the real highlight being the final round of the senior Champs to be co-hosted by Denmark/Poland (men) and by Germany/Switzerland (women). The European Sports Organizing Commission also worked out a detailed ranking for national teams in all age groups to be used to assign teams to the various preliminary rounds and Pools. Mr. Mulheims concluded his intervention by adding that the CEV is about to organize – for the first time in history – the qualifiers for the next FIVB World Champs with the second round coming up in May 2013. The composition of the various Pools will be dispatched soon by the CEV thereby triggering a much awaited campaign for the events that are coming up in 2014 in Poland (men) and Italy (women).

Jan Rek, President of the European Refereeing Commission, focused his intervention on a master plan worked out to support an up-and-coming generation of young and talented referees and – in cooperation with the EMC – guarantee that all referees have got the necessary physical and psychological skills to professionally fulfill their tasks. The ERC President also recalled his intention to pursue the introduction of high-tech tools – such as the innovative video verification system tested in the CL finals – to minimize wrong calls in deciding moments of the match. Additionally, the role of female referees is being asserted on the international arena with the third seminar specifically addressed to ladies having taken place this past May in Sofia, Bulgaria, and the NFs being supposed to keep the CEV up to date about their actions keen to support the active involvement and participation of female referees. The ERC also held an ad-hoc seminar for Referee Delegates to standardize their work and the way they evaluate the performances of the referees they are supposed to mentor and instruct.

CEV Senior Vice President Aleksandar Boricic concluded this session by reporting about the activities of the European Coaches Commission (ECOC), the youngest among all Commissions in the CEV family, whose primary goal is to harmonize the international calendar. The ECOC has also proposed the introduction of additional age group competitions, whose feasibility will be studied together with the ESOC to possibly create U22 and U23 Championships for women and men respectively to avoid that many players leave the sport after they lose eligibility to compete in the junior division. Additionally, an international coaching seminar shall be organized in 2013.