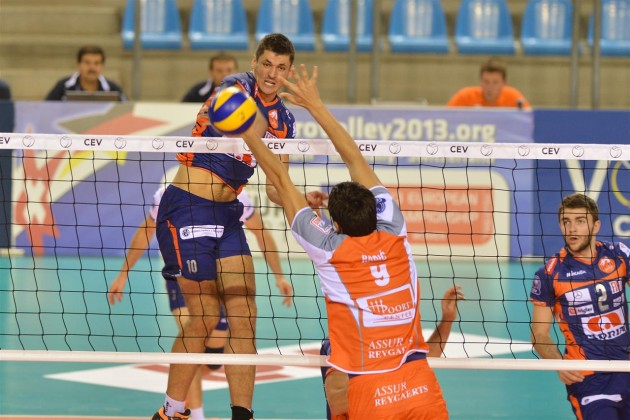 Young star Uros Kovacevic set immediately the tone of the match for the guests from Slovenia (0:4) but even a time-out asked by local head coach Marko Klok could not stop the splendid run of ACH Volley (1:8). Klok tried to change a bit the course of the game by adding Dutch spiker Brian Schouren but LJUBLJANA was in full swing (10:16) and with Kovacevic standing out in attack as well as from the serving line, ACH Volley cashed the first set with the massive score of 14-25.

Yves Kruyner and Schouren were confirmed as the diagonal also for the start of the second set but Euphony quickly went down 1:4. ACH Volley showed good tempo (6:12) before ASSE-LENNIK could close a bit the gap via the duo composed by Schouren and Jozef Piovarci (10:14). Still ACH Volley looked in full control (13:18, 14:21) and finished the set at 19-25 after the home side had scored some more points with the help of Piovarci and Canadian Thomas Jarmoc.

Jarmoc kept the score close in the early phases of the third set (4:4) but via a series of good services LJUBLJANA opened the gap once more (6:11). ACH Volley had a margin of six by the second technical time-out and this was widened to 10 after a mistake by Valters Ramma (11:21). Piovarci and Schouren played their best but ACH Volley could deservedly pocket the match in straight sets (17-25).