Lube Banca Marche MACERATA secured tonight a spot for the Playoffs 12 of the 2013 CEV Volleyball Champions League after downing Generali UNTERHACHING of Germany 3:0. They have five more points than ACH Volley LJUBLJANA. Ivan Zaytsev, Starovic and Parodi were the best. Matias Raymaekers and Jan-Willem Snippe were applauded by the audience. 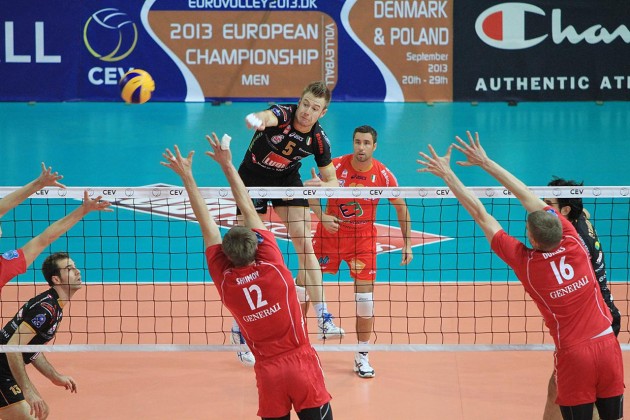 Two players of the visiting team, Matias Raymaekers and Jan-Willem Snippe, were received with a standing ovation by the 1’500 spectators in attendance as they had spent a couple of seasons in Macerata seizing with that club the trophy of the National Cup as well as the Supercup.

The match was quite close in the opening set where the final break was claimed by home middle blocker Dragan Stankovic who scored for the 24:22 blocking Christian Duennes. The final point was then claimed by wing-spiker Simone Parodi, the best player of Italy’s champions tonight.

After that, MACERATA totally dominated the game with some great serving and blocking. In the second set the team mentored by Alberto Giuliani was leading 8:3 at the first technical time-out, then 11:4 with an ace scored by Serbian opposite Sasa Starovic, and closed the operations at 25-15 once again with Parodi.

Some kind of a reaction from the side of UNTERHACHING arrived only in the third set, mainly via the spikers Alexander Shafranovich (8 points) and Snippe (11 points). But the Germans could play point to point just until 9:9. Then Lube Banca Marche turned again the situation on its own way with the great performance of spikers Ivan Zaytsev (11 points, pictured), Starovic (12) and Parodi who eventually top scored tonight with 14 points. With this 3:0 MACERATA remains unbeaten in Europe’s most elitist competition after four rounds of play.

“We are very happy for the victory as the result confirmed us at the leaders of the Pool” says Italy’s national team star Simone Parodi. “The Champions League is the primary target of our club in this season. Now we can say that the qualification for the Playoffs 12 is very close”.