CEV CL: Noliko and Iraklis to battle for spot in Playoffs 12

Maaseik, Belgium, January 15, 2012. Noliko MAASEIK and Iraklis THESSALONIKI will be battling on Wednesday for a spot in the Playoffs 12 of the 2012 CEV Volleyball Champions League. 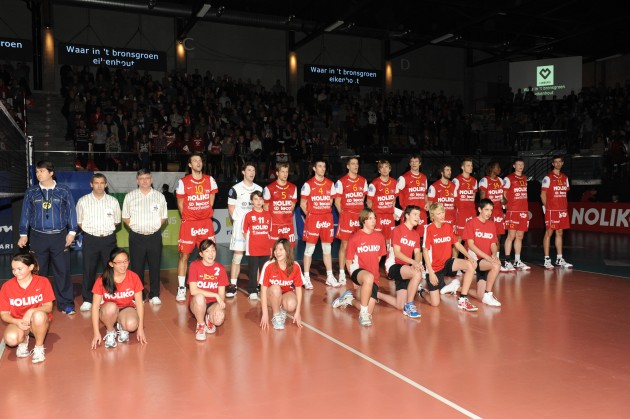 With Arkas IZMIR having already booked the first place in Pool A, they are going to put up a real fight for the second slot at stake to make it to the next round of Europe’s most elitist competition.

“This is definitely going to be a tough match; in Greece we eventually lost 2:3 but Iraklis has recently added to its roster Cuban spiker Rolando Despaigne and hence they are even stronger than some months ago” says Noliko head coach Vital Heynen.

Despaigne immediately showed his value by pacing his side this past week on the way to a home win over Bulgaria’s CSKA SOFIA.

“I hope that we will perform as good as we did in our last match with Arkas as our ambition remains to qualify to the next round” adds Heynen, who hopes for the usual support coming from the fans that will be resuming to the splendid “Lotto Dôme”.

Noliko will be missing Nathan Wounembaina who got back to Cameroon to play the African Olympic qualification tournament that is about to start there in Yaoundé. Noliko and Iraklis have so far dominated their domestic leagues: the Belgians recently downed Soleco HERK-DE-STAD (formerly Aquacare HALEN) in straight sets while Iraklis claimed the derby with Aris THESSALONIKI at the tie-break. Noliko has got a positive streak of 14 wins by combining the national league and the national cup.