Munich, Germany, January 16, 2012. Witnessed by famous German cook Alfons Schuhbeck Generali UNTERHACHING notched another win in the Bundesliga before going into its final match for the prelims of the 2012 CEV Volleyball Champions League coming up on Wednesday in Italy against Bre Banca Lannutti CUNEO. 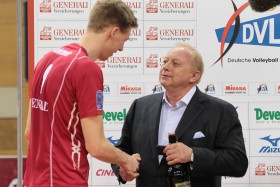 Generali UNTERHACHING has got something cooking

Sometimes it seems that Generali UNTERHACHING is playing in two worlds that are very far apart. In the Champions league the Germans are on the brink of elimination after the preliminary round, desperately needing a win against CUNEO and help from Jihostroj CESKE BUDEJOVICE that plays France’s Stade Poitevin POITIERS.

On the other hand, in the German Bundesliga they stay untouchable having scored 15 wins in as many matches played up to now.

“So far my team is playing a sensational season” head coach Mihai Paduretu said after the 3:1 victory against evivo DÜREN at Generali Sports Arena.

“Every team cuts loose against us – but nobody wins”.

That is a different story though in the 2012 CEV Volleyball Champions League, but with a 3:0 or 3:1 victory in Italy his side stands a small chance to reach the Playoffs 12.

“We’ll try everything there” Paduretu promises.

Starting with the second set UNTERHACHING raised the level of its offensive game and won the next three sets in a convincing way (25-16, 25-18, 25-15).

Captain Max Günthör was voted MVP of the match and was presented with the medal and a bottle of special Bavarian beer by star-cook Schuhbeck (see picture).

“It was my first time at a Volleyball match. It was never boring and I saw great rallies”, he said.

Turkey: DOL for women’s Olympic qualifier is completed in Ankara