After losing once to VfB FRIEDRICHSHAFEN and Knack ROESELARE and suffering two consecutive defeats to last year’s winners of Zenit KAZAN, Hypo Tirol INNSBRUCK is trailing in Pool A six points behind the side that currently sits in second place, i.e. ROESELARE. Read latest volleyball news on Worldofvolley.com. 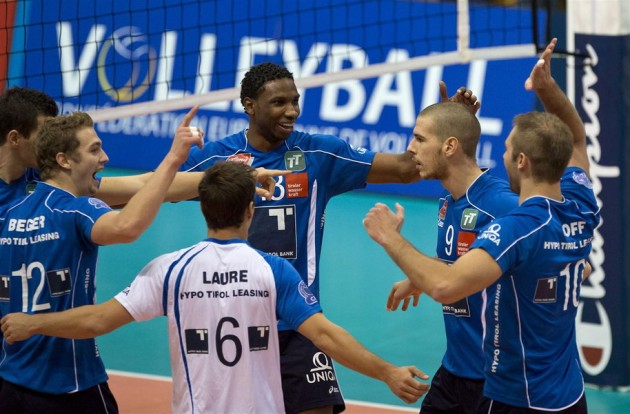 The chances to finish second in Pool A and make it to the Playoffs 12 are nevertheless still alive for the Tyroleans, as they still play their direct opponents for second place and theoretically could catch up the 6 points.

To do so, the team of head coach Stefan Chrtiansky has to win their home match against Knack ROESELARE on Wednesday and take all 3 points available from this game. The match in Belgium is not a good memory, as Hypo Tirol lost there in straight sets and did not play consistent enough to challenge its opponents. At home, INNSBRUCK has shown good performances so far in Champions League play and the team will have to show a different face as it did in Roeselare. Especially the receivers will have to do better, as Hypo Tirol showed major problems in this fundamental while playing Knack and therefore was never able to find its rhythm of the game. On Wednesday the team will fight for every point and for the last chance to prolong its dreams in the Champions League.
Head coach Stefan Chrtiansky says: “It’s all or nothing for us. We either stay in the race for second place or we are definitely out. The team has to show some reaction after the last results, but I think the guys recovered well and we have to fight. Again, it’s all or nothing”.