The Czech champions of Agel PROSTEJOV have scored three easy wins recently, however, now a difficult match is awaiting them in the fifth round of action for Pool B of the 2013 CEV Volleyball Champions League as they cross their ways on Wednesday with Poland’s champions Atom Trefl SOPOT. Read latest volleyball news on Worldofvolley.com. 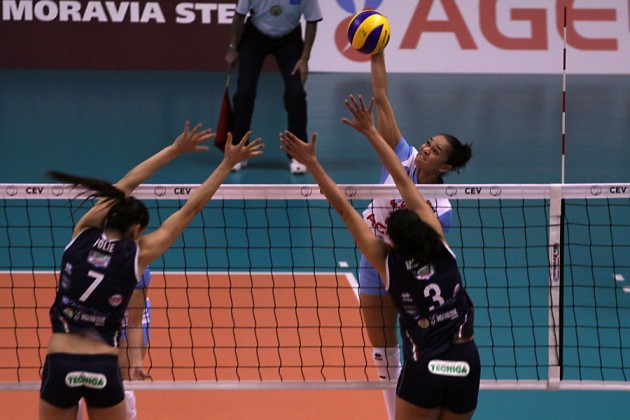 The Czechs are sitting at the bottom of the standings in their group and it is already impossible for them to make it to the Playoffs and also very unlikely to advance to the Challenge Round of the 2013 CEV Volleyball Cup as one of the best third-ranked teams. The main objective is hence to get at least one point in the standings. “But I am not able to tell you what kind of result would make us pleased. The important thing is to perform well and play a close game against SOPOT” says Miroslav Cada, the head coach of Agel PROSTEJOV. The situation is not good because at least half of the Czech team is dealing with some health problems. “Sarka Melicharkova and Andrea Kossanyiova have been injured for a long time, while Michaela Jelinkova is going to undergo knee arthroscopy, and Marketa Chlumska and Marina Miletic are also dealing with knee problems. These injuries have piled up for us, but I believe that at least Marketa and Marina will be ready to play on Wednesday so that we can show off our strength” adds the Czech mentor.

He recommends to his players not to think about their health problems too much. “The girls should not focus on their health problems and give their maximum. It is clear that something starts aching in the middle of a demanding season” he stresses. But he is not going to push his ladies in any special way for the match against Atom Trefl. “We were criticized for our last Champions League match and that is motivating enough. We all know we have to do much better than we did against VILLA CORTESE and especially play with more fighting spirit to show our maximum in the match”.

The team captain Solange Soares has a similar view: “I do not want to say the same but the most important thing is to play good Volleyball. If each girl pushes herself and does her best to fight really hard, it is possible to claim a good result. In my opinion, the rival’s strength is not as important as the efforts we are willing to give. It is mainly about our attitude. Actually winning or losing does not matter; we just must have a clear conscience about the game and be sure we really did our utmost”.