CL M: Noliko wins yet again and makes it five in a row 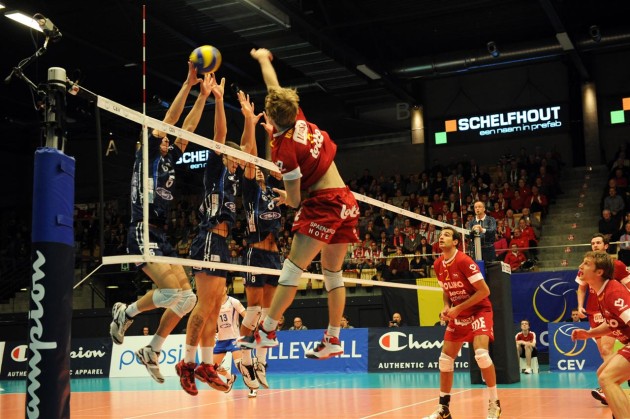 Noliko MAASEIK caught a good start (4:2) but then Marek Union-Ivkoni DUPNITSA took over the lead (4:5). In a nervous game Noliko MAASEIK fought back (8:6) and took the lead with a margin of four (12-8) widening it steadily (16:10) eventually clinching the first set rather easily with the score of 25-15.

Noliko MAASEIK continued its impressive performance in set 2. The hosts stayed focused and kept Marek Union-Ivkoni DUPNITSA constantly under pressure (5:2). Noliko MAASEIK exhibited top form with well-placed powerful serves, fierce fast-tempo hits and a precise defense (10:7) to take a crucial lead (16:9). Noliko MAASEIK maintained its momentum (20:12) throughout the remainder of the set as the offensive efforts of youngsters Kevin Klinkenberg and Hermans Egleskalns anchored the home side to the provisional 2:0 (25-14).

“My young team was very nervous in the first two sets and made many mistakes, I’m happy that our performance was much better in the third set. I regret that we could not take this set,” the head coach of DUPNITSA, Nayden Naydenov, stated.

“This is a great performance, we played as a team again after two losses in the national league; we have the first place in our pool, so mission accomplished” said a very satisfied Noliko coach Brecht Van Kerckhove.

POL M: Fabian Drzyzga – We will not rest on laurels

Serbia: Partizan is not likely to surrender...