In a match that was not going to have any impact on the future perspective of these teams when it comes to the European Cups, the home guys of Fenerbahce Grundig ISTANBUL were edged on Wednesday by PGE Skra BELCHATOW of Poland with the score of 1:3 (28-26, 17-25, 17-25, and 17-25). This and other volleyball news read on Worldofvolley.com. 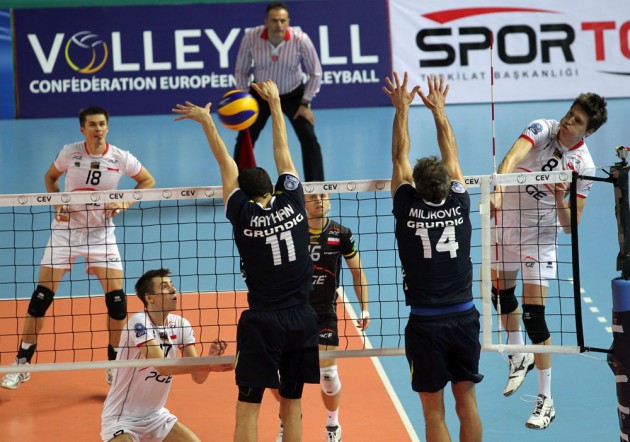 With this result last year’s silver medalists completed their run in the prelims of the 2013 CEV Volleyball Champions League with a perfect record of six wins in as many matches.

Skra caught the better start in the first set (5:8, 7:13) and even though it looked like this section was going to end quite quickly (10:19), Fenerbahce stormed back anchored by Ivan Miljkovic who scored 9 points all alone. After drawing level at 22, Fenerbahce finished the job by cashing its fifth set ball with a perfect block by Turkay Dogan (28-26).

However, the guests imposed their pace right from the early phases of the second set (5:8) and after going up by four at the second technical time-out, they did not look back (17-25) to go for the 1:1. As the local heroes did not look that motivated, Skra could dictate the tempo of the game also in the third set (4:8, 10:17) and quickly pocketed another 17-25. Even though they were using some young players tonight, the Poles played with confidence and after conceding a provisional lead to Fenerbahce in set 4 (8:7), they changed gear to finish it off – once more – at 17-25 for their sixth consecutive win in Pool E.
Ivan Miljkovic top scored in the match with 21 points.

“We did not think we could lose tonight and I feel really sorry for this defeat” says Fenerbahce head coach Daniele Bagnoli whose side has claimed only one win in this year’s campaign. “The most important thing is that none gets injured but I still do not know what will happen in the remainder of the season” stressed Miljkovic.

“Some of our best players had stayed in Poland so this victory is even more important for us” says Skra mentor Jacek Nawrocki. “We did not expect this result before the game. Since some of our young players had the chance to play tonight, we are even more pleased with this win” concludes Skra player Pawel Woicki.