By beating Arago de SETE in straight sets (26-24, 25-14, and 25-16) in the last duel of the prelims Asseco Resovia RZESZOW secured its spot in the Playoffs 12 as second-ranked team of Pool G with 4 wins, 12 points in the standings and a decent set ratio (13-7). Read latest volleyball news on Worldofvolley.com. 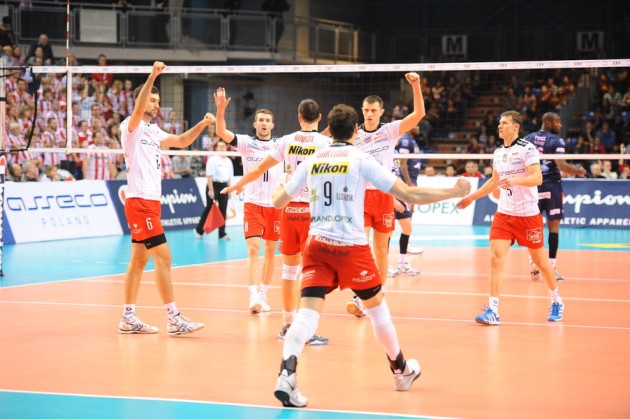 After such delightful evening the Polish champions are looking forward to the drawing of lots for the Playoffs that is scheduled for Thursday afternoon.
The tension before this game was huge as the hosts had to seize a convincing victory over Arago de SETE in order to guarantee their promotion to the next round of the competition regardless of the results from the other Pools. Eventually it turned out to be an easier game than expected.

However, at the beginning of the game the Polish champions seemed to be a bit overwhelmed by the pressure weighed on them. As a consequence, the visitors very early took a 3-point lead (1:4) via a counter-attack of Stanislas Rabiller and a successful block on Aleh Akhrem. Asseco Resovia players managed to level the score (11:11) after a block to stop Raphael Mrozer. However, the French team didn’t lose composure and regained the lead (13:16). The hosts started their chase once again (from 16:18 to 20:18 thanks to the excellent service of Aleh Akhrem and impressive counter-attacks finalized by Nikola Kovacevic). At the end of this close section (from 24:22 to 24:24) the very efficient Nikola Kovacevic (6 points in the first set) silvered the last ball for the local team. The hero of this part of the game was also middle blocker Wojciech Grzyb (7 points including 2 blocks and 1 ace with an impressive 100 % of efficiency in attack).

The win of the first set gave the hosts more confidence (6:4 and 15:10 after a series of mighty blocks displayed by Wojciech Grzyb). With a comfortable lead Resovia was playing better and better whereas the visitors were committing more and more mistakes (23:13 after a series of tricky floating services performed by Grzegorz Kosok). At that moment of the game the domination of the hosts was clear and the final 25-14 was cashed after another impressive attack by Wojciech Grzyb.

In the third set Asseco Resovia players didn’t want to slow down the pace (8:5 after a massive block on Junot Mistoco). After a series of mighty services displayed by Zbigniew Bartman and efficient counter-attacks of his team-mates Asseco Resovia went up by 5 points (16:11). The hosts were dominating the game completely (20:12) whereas their opponents seemed to have lost their fighting spirit. One of the heroes of the local team – Nikola Kovacevic (13 points overall) – finished the job for the hosts at 25-16.
The top scorer of the game was Asseco Resovia opposite Bartman (14) while Baptiste Geiler registered 8 points for Arago de SETE. The hosts overpowered their opponents in service (7:0) and blocking (14:6).

“In the first set we played very good and showed a good level of Volleyball but we missed something especially as we had to finish the rally. Afterwards Resovia gained a lot of confidence and for us it was very difficult to play. They had an amazing service tonight whereas we were struggling with our reception. Despite the defeat we are happy that we had the opportunity to play in the CEV Volleyball Champions League. For us it was a great and invaluable experience” admitted Benjamin Toniutti, Arago de SETE captain.

“We are very pleased with the victory and the three 3 points which was our goal. The victorious ending of the first section was crucial because later on we played with more confidence and we managed to put some pressure on our opponents especially with our excellent service” stated Aleh Akhrem, Asseco Resovia captain.

“We didn’t use our chances in the first set which was very nervous for the hosts. Later on the biggest difference between our teams was in service. Asseco Resovia almost demolished us with their aggressive service and block. We had huge problems with our reception and as a result it was very difficult for us to score” said Patrick Duflos, mentor of the French team, after the game.

“We accomplished our minimum goal which was the promotion to the Playoffs 12. We were a bit anxious before this game. We didn’t know what to expect from our side as the last weeks were very busy for us. We had a lot of away matches and no time for training. But in the end we clinched an important victory and now we can focus on the future” concluded Andrzej Kowal, Asseco Resovia head coach.