Dinamo MOSCOW rounded out its campaign in the prelims of the 2013 CEV Volleyball Champions League by downing Tomis CONSTANTA of Romania in straight sets (25-18, 25-22, and 25-18) to qualify for the Playoffs 12. This and other volleyball news read on Worldofvolley.com. 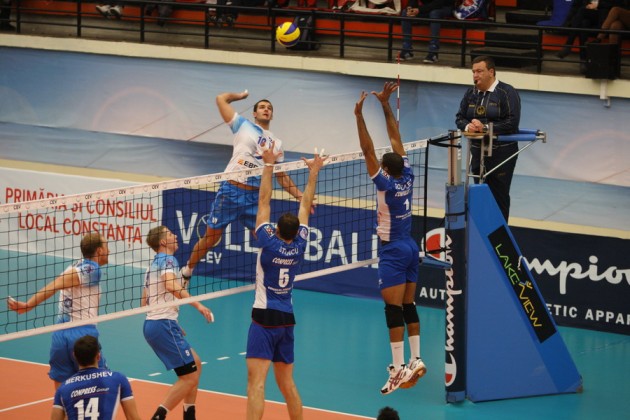 In order to make it to the Challenge Round of the CEV Cup, Tomis needed a home win tonight but Dinamo was simply too strong to stand.

The guests from Russia started out by imposing their pace and after going up 8:2 and 16:12, they easily pocketed the opening set with the score of 25-18. The situation slightly changed in the second set where Tomis started pressuring its opponents from the serving line but still Dinamo got to the front (8:6, 12:10) before CONSTANTA flipped the charts around by the second technical time-out (16:15). That was all for the home side as Dinamo could find again its best play to wrap it up at 25-22. The third set was also totally dominated by Dinamo (8:3 and 16:9) with the final 3:0 (25-18) being the logical consequence of that show of strength.

“We had prepared very well for this game and we claimed an easy victory. Tomis tonight did not play their best and the game we had previously played in Moscow was more difficult for us” says Dinamo mentor Yuri Cherednik.

“It was our worst game this season. It isn’t a shame to lose to Dinamo but rather the way we did lose is quite embarrassing. Apart from this, Dinamo was better in every single fundamental” says Tomis head coach Radovan Gacic.