Zhou Jie, 24, is one of the many volunteers that are assisting players, officials and fans at Earls Court. A student in mechanical engineering, Jie was born in China, near Shanghai, but has been living in the United Kingdom for the past five years. “I got here on an exchange program sponsored by my high school and eventually settled down in London to pursue my academic education here. I still have one year to go to complete my bachelor and I have plans to move to the US to get my Ph.D. Afterwards, I may decide to go back home” he says. 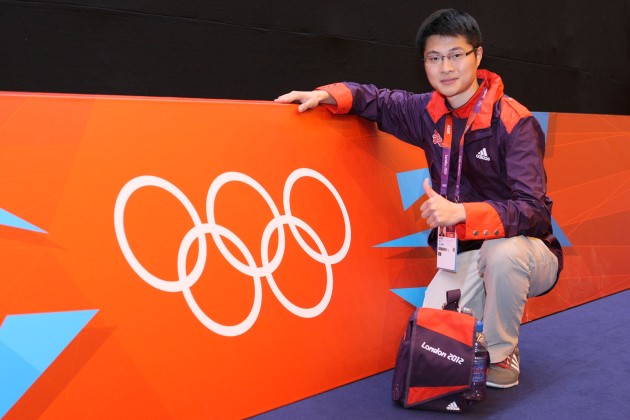 A student in mechanical engineering, Zhou Jie is one out of hundreds of volunteers at Earls Court

Jie missed the Beijing Olympics as by that time he had already moved to Europe and living just nearby London got excited about the idea of applying for joining the “army” of volunteers that these days have turned into one of the city’s trademarks – along with the well-known sites included in sightseeing tours – with their colorful uniforms, friendly demeanor and enchanting smiles. “I applied quite some time ago via the Olympic Committee and finally got an e-mail confirming the acceptance of my request. We have been going through three steps thereby getting trained for our tasks and since the start of the Games I have been assigned to different areas, being responsible for the ticketing, assisting the spectators and the press on the stands as they were searching for their seat or for any other information they would need. It feels great to be part of the Olympic family! This morning I could follow the match of team China against Turkey and was very happy to see my compatriots score a good victory” adds Jie.

This is not the first time he got the opportunity to have a first-hand look at volleyball as he shares memories from his childhood: “This is a distant memory but I know that as a little child I attended some matches of the Chinese national league in my hometown. That was back some years ago but I always liked the sport. China’s volleyball personality remains Lang Ping, a gold medalist from the 1984 Games in Los Angeles; I know she’s here with the Chinese TV as a commentator, she is still like a national hero in my home country”.

His favorite athlete remains 2004 Olympic champion and former world record holder Xiang Liu, another of many Chinese heroes who unfortunately could not perform at the Beijing Games as he was struggling with a back injury. “He lined up for the heats of the 110 m hurdles but eventually withdrew from the competition. That was a kind of shock for the whole nation”.

After two days China is already on top of the medal tally here in London with 6 gold medals. Jie’s favorite sport is diving, a real gold mine for the Asian giant that yesterday started by winning the 3 m synchro event with the duo composed by Minxia Wu and Zi He. Four years ago, in conjunction with the Beijing Olympics, China dethroned the USA and Russia thereby topping the charts with a display of supremacy and dominance that impressed the whole world. “Since we hosted the Olympic Games in Beijing, China has got more and more into it and I am quite confident my country will finish once again on top of the table here in London. Of course it would be very nice if I could celebrate a medal also in volleyball since I am here at Earls Court”.

Questioned about the reasons that may explain China’s stardom on the international arena, Jie says there are no secrets for that: “It is a combination of hard work, motivation, professional coaching, not to mention the full support given by our national authorities and by many sponsors”. On Monday China opened the program at Earls Court by cruising to a 3-1 win over Turkey showing off motivation and focus to fulfill the expectations of Jie and many other fans back home. “One day I may go back to China, being proud to share my knowledge and experience around the world to contribute a bright future for my home country”.

Like many athletes competing at the Olympics, Jie is a world’s citizen but still happy to assert his identity… Meeting Jie and many other people all brought together by the Olympic spirit is a lifetime experience in itself.

OG W: Kim unstoppable in triumph of Korea over Serbia

PHOTO OF THE DAY: Mikasa always at...