German opposite Jochen Schöps is another famous player who joined Asseco Resovia RZESZOW before the start of the 2012/2013 season and supposed to replace his compatriot and friend – György Grozer - together with Zbigniew Bartman, opposite of the Polish national team. 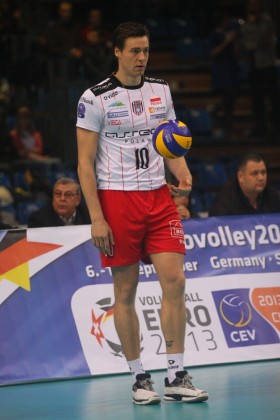 Jochen, you haven’t been playing a lot for Asseco Resovia this season but last Friday against Delecta BYDGOSZCZ in a PlusLiga game you had to play because Zbigniew Bartman is injured (he’s struggling with the strain of a thigh muscle). Were you ready to take that responsibility on your shoulders?

During the practice before the game Zibi felt that something was wrong with his muscle. He had to go for some medical tests and I knew that if his health problems were serious it would be my turn to help the team. I think we played a good match against BYDGOSZCZ as we won 3:0. It wasn’t maybe a perfect game but we did a really good job especially at the end of the sets with our tactics and successful play in block and defense.

Was it important for you to have this opportunity and play the whole game from the start up to the end?

Of course it felt good to play a complete game. I’m normally never satisfied with my own performance because every time there are some things that could have been better. Nevertheless, I tried to help the team as much as I could. So far you weren’t a bit disappointed with your only “supporting role” in the team because Zbigniew Bartman has been playing as the main opposite? I wasn’t disappointed because even in those matches that we lost Zibi wasn’t playing bad. We don’t know what would have happened if I had replaced him but it’s only guessing. Nevertheless, it felt good for me to play a whole game against Delecta BYDGOSZCZ. It’s totally different when you come in only for some rallies during the game and try to find some extra points. It’s not the same feeling as the situation in which you are playing a whole game. I think that everybody from our wide and competitive team wants to play and give something positive to the team when they have their chance to play.

Are you satisfied with your stay in Rzeszow and the level of play in the Polish League?

Everything is ok. The club is well organized and Rzeszow is a very nice city to live, totally different from Moscow where I spent the last five years. The biggest difference is that here everything is easily accessible in terms of the distance and prices. As far as the Polish League is concerned, I expected that it would be very balanced and demanding. Moreover, I think that in Russia there were more players with big power in attack and high but straight block. They also didn’t use so much tactics as we do in Poland. For me it’s maybe a little bit easier to score the points here because the block is different and I can play trying to exploit it. On the other hand, in Poland most of the teams play really good in defense so for me it’s a big challenge to play here.

An interesting looking clash between the current Polish and Italian champions (Asseco Resovia RZESZOW and Lube Bance Marche MACERATA) in the Playoffs 12 of the CEV Volleyball Champions League is coming up very soon. In your opinion what are the chances for Resovia to advance to the next phase considering the fact that in the last few years RZESZOW has never won a single game against Italian clubs in the European Cups?

First of all, I don’t believe in any positive or negative streaks or statistics from the past. It doesn’t count at all. It’s also difficult to predict anything in advance and estimate our chances. For example if we are in full strength with all our players like Zibi and Aleh Akhrem who weren’t able to play in our last game in the Polish league, the chances of both teams would be equal because MACERATA has also some problems with injuries. There are still a few days to the first game in Rzeszow and this situation with the players and their health can change. Besides, it’s every time difficult to compare two teams from different leagues. I think that the condition on that day will be decisive and it’s senseless to make any comparisons or predictions.

What kind of memories do you recall from the past Champions League finals in which your former teams have participated in?

The greatest moments comes from the Final Four in Moscow in 2007 when my team at that time – VfB FRIEDRICHSHAFEN – defeated favorite Lube Banca Marche MACERATA in the semi-final 3:2. As far as I remember, we had almost lost that game because we were trailing in the tie-break but then we made a series of unbelievable points like an ace and impressive single blocks contributed by Lukas Divis. At that moment the emotions started to rise. That was definitely the most amazing moment I have experienced in my career just to go to the final and furthermore to seize that match ball of the final game against TOURS VB. I was so excited that I even don’t remember what exactly happened after the last ball of this final. I was probably running along the court with big enthusiasm and joy.

It was a very good season for us and indeed, we had an impressive series of victories over the Italians. I don’t know how to explain this phenomenon. Of course, we were very motivated against them but the other thing is that they probably underestimated our team a little. Anyway, we managed to play against them really good.

This incredible success gained with VfB FRIEDRICHSHAFEN in 2007 has probably helped you receive lucrative offers from other clubs?

Of course it was the beginning of another chapter in my career. Actually, I was already thinking about leaving FRIEDRICHSHAFEN before the 2006/2007 season because I had played there for a few years and I wanted to change something. Thanks to this impressive result from Moscow the doors seemed to be more open for me. There were many offers from other clubs but I spoke very early with my manager and we decided that the best solution for me was to sign a contract with Iskra ODINTSOVO. So in the end I didn’t think too much about the other offers and I accepted their proposal.

With Iskra ODINTSOVO you participated in the Final Four tournament in Prague in 2009 in which the Russian team took third place, probably disappointing a bit taking into account the high ambitions of this club.

They had huge expectations but in the end we couldn’t play our best in the Champions League. In the final tournament in Prague there was really a big pressure on our team and from the beginning everybody was speaking already about the final, not the semi-final which we played against Iraklis THESSALONIKI. We started this game with the Greek team quite well but then we had problems that we couldn’t resolve. The pressure and our obligation to win this game were too much to stand. At the end we won “only” the classification game with Lube Banca Marche MACERATA. It was a disappointing result for our club but I think third place and bronze medal in the Champions League are not a bad result.

In occasion of those aforementioned Final Four tournaments you received also individual awards being MVP in Moscow in 2007 and best scorer in Prague in 2009.

Unfortunately in Moscow the Russians somehow lost this statuette for the MVP. They said that they would send it to me later on to Germany but they have probably never done this because the German Federation didn’t receive this trophy from them. It was a bit disappointing but at least I could receive my individual award from Prague.

To read more news from this section click on Interviews.

Check out our After sport’s career section. Every Thursday a new story. This Thursday read about Why do so many athletes struggle to cope with retirement?

STORY FROM THAILAND, Anna Spanou – “They...