Monica Seles was born in Yugoslavia (now Serbia). She was the top ranked girls under 18 player in the world by the time she was 13 years old. In 1990 at the age of 16, she became the youngest female player ever to win the French Open. She became a United States citizen in 1994. 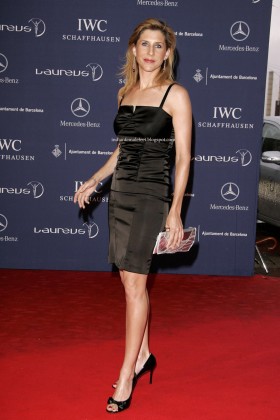 In April 1993, while playing in a tournament in Germany, she was the victim of an on-court incident when a man ran onto the edge of the court during a change-over between games and stabbed her in the back. She did not return to competition for over 2 years. Although she enjoyed some success after resuming her tennis career, she was never able to show consistency at top form. She played her last match at the French Open in 2003 and officially retired in February 2008.

Upon her retirement, Monica said, “I’m now opening a new chapter where I hope to share how I found balance, strength, and happiness in my life after a roller coaster ride of exhilaration, accomplishment, and sometimes overwhelming tragedy.”

In 2008 she competed on the U.S. television show ‘Dancing with the Stars’. She and her dancing partner did not make it past the second round of competition, but her appearance put her back in the public eye.

In July 2009 she became a member of the International Tennis hall of Fame. In June 2011, she was named one of the 30 Legends of Women’s Tennis, Past, Present, and Future, by Time magazine. In 2012, the Tennis Channel created a list of the 100 greatest tennis players of all time, and Monica was listed as the 19th greatest.

She has indicated her toughest battle after the attack was chronic overeating in an effort to deal with the stabbing and subsequent mental and physical rehabilitation. In 2009 her book, ‘Getting a Grip: On My Body, My Mind, My Self’, was published. In it she chronicles, among other things, her bout with depression, addiction to food subsequent to the stabbing, and life beyond tennis.

Monica has devoted much of her time since retirement from tennis advocating for healthy eating, physical fitness, self-image, and self-confidence. She is a goodwill ambassador for IIMSAM, a non-profit organization working to promote the use of Spirulina against severe malnutrition. She recently, August 2012, served as the keynote speaker for an event to benefit Happiness House Charity. Happiness House offers programs and services for children and adults with disabilities.

For more news from this section click on Fun.

Read news from our Did you know? section, every Friday a new story. Tomorrow read about Snow Volley Christmas tournament attracts 64 teams in St. Petersburg.

YEC F: Poland makes it to final round after fourth consecutive win