Quinta Steenbergen: “I have advantage over Denis Hanke”

On September 7, the ageless battle between Germany and the Netherlands will continue – this time at the EC in Halle/Westfalen. The Netherlands have many actors with Bundesliga (1st division in Germany) experience in their squad. Including middle blocker Quinta Steenbergen, who has won the double (league and cup) with the Schweriner SC. 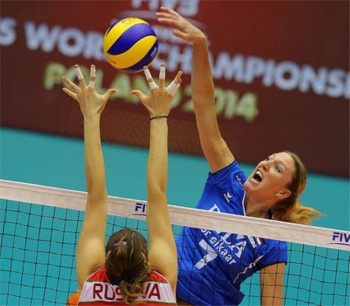 What the 28-year-old thinks about the game against Germany and her experience with the venue and how their expectations for the season highlight are, she talks in an interview.

What did you first think as it was certain that your team is going to play together with the German team near the border in Halle/Westphalia?

“Always nice to meet our neighbors in a tournament. Especially after nice and successful season I played in Schwerin.”

How many spectators from your home country do you expect?

You have already successfully played in the GERRY WEBER STADION and won the 2013 German Cup. How did you feel in this huge stadium?

With the Schweriner SC you have won the double of championship and Cup. Now you join the Czech double winner Prostejov. Why have you changed?

“I played a wonderful season in Schwerin, now I was given the chance to play with the national champion of tsjech-republic and decided to take that opportunity.”

In the summer the Netherland volleyball made headlines due to the horrible death of Ingrid Visser and her partner. How did your team receive and assimilate that?

“It is still a terrible loss and immensely sad situation. Ingrid and Lodewijk still come by in the group probably every day, if not in words then at least in mind. We often speak about her amazing career, and the wonderful person she was. In volleyball we find support and the strength to push on.”

“Many new enthusiastic young players with a lot of talent, unprejudiced play. If we can keep a consistent level, we can be a surprise.”

Where is need for improvement?

“Keep a consistent level during a match and the tournament.”

Matches between Germany and the Netherlands are something special in volleyball, too. Why?

“I think because we play almost same game-type and the players are similar to ours. That and the fact that we are neighbors always gives a certain struggle. In the past it always was a close call and both teams have the ability to win the match.”

Among others you play against Denise Hanke who is the setter of the Schweriner SC. For whom is it a bigger advantage to know each other well?

“I think for me, because I’m a blocker and I know which type of game she plays as a setter. So she has to outsmart me”

What is your and your team’s goal at the EC?

How satisfied was Quinta with the performance and the results of the Netherlands national team at the Grand Prix?

“We hoped that we could win one more game ( against Bulgaria) but overall we were satisfied.” said Quinta Steenbergen.

To read more from this compettion click on European Championship 2013 W.