The most experienced player of Vojvodina, Andrija Geric, after winning Serbian Cup, told that the goal of his team is to bring back spectators to Spens Hall in Novi Sad. 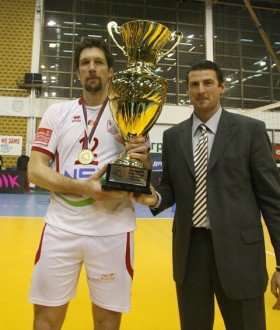 – Our goal is to bring back spectators. Quality was not on the highest level, but we worked hard. We have space to improve our playing. We can play better and have time to prepare for the ending of season. I am glad that title is brought back to Novi Sad, because spectators deserve that – said Geric after the match in Novi Sad.

In the final match of Serbian Cup, Vojvodina defeated Mladi Radnik from Pozarevac with 3:1 in sets.
The coach of Vojvodina, Nikola Salatic said that his team played well, but that it could play even better, because it has many reserves.
– We knew that this match determines the trophy and we also knew that we could not give up after losing the first set. Desire for victory was on the high level. The opponent has played pretty well and made the final match very exciting.

The coach of Mladi Radnik, said that his players have done their best.

– It is a good feeling to play finals in this atmosphere. Vojvodina has deservedly won the Cup, and my players have played well. I cannot object anything to them, because tonight they have given their best – said the coach of Mladi Radnik.

RUS: Belogorie didn’t make it through 1/8 finals of the Russian Super League!

Goncharova: “I hope to return to the...

INTERVIEW: Ivan Castellani – “We have to...