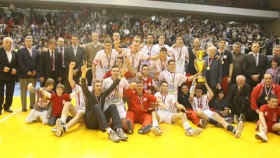 This is the thirteenth trophy in history for the club that had previously beaten Partizan Termoelektro BEOGRAD at the tie-break in the semis while Mladi Radnik had come out on top of the second match by besting Ribnica KRALJEVO.

The final was attended by many VIPs and authorities, including the Secretary General of the Volleyball Federation of Serbia (VFS), Slobodan Milosevic, VFS Vice President Vladimir Grbic, the current head coach of Serbia’s national team, Mr. Igor Kolakovic, plus some more former Volleyball stars such as Slobodan Boskan, Vladimir Batez, Djula Mester and Dragan Nisic.

The Lord Mayors of Novi Sad and Pozarevac, Igor Pavlicic and Miodrag Milosavlijevic, were also there to cheer on their respective sides.

Vladimir Grbic presented his former teammate and current team captain of Vojvodina NS Seme, Andrija Geric, with the trophy for the winning team while Nikola Vadic, i.e. the captain of Mladi Radnik, received a commemorative plate by Mr. Goran Cato, the President of the Association regrouping all clubs included in Serbia’s first division.

The gold medals were presented to the winners of the competition by the Lord Mayor of Novi Sad and by Mr. Vasa Mijic, the Managing Director of the “Vojvodina NS Seme” Volleyball club.

ITA A1: Newsletter Lega Volley: Round 20 in numbers