RUS M: Vladimir Alekno – Russia will want to win everything

Despite the fact that the editorial task obliged to visit the men's volleyball team workout, the first person delegation of the "SE" in Novogorsk saw was the head coach of women's handball team Evgeny Trefilov. An experienced specialist, hurrying to the occupation, has been obviously surprised by the gathered journalists. But after a few minutes in the hall appeared was also Vladimir Alekno who at once has gone to its expecting representatives of mass-media. The first question to the instructor has been set about starting in some days in Japan to World league. 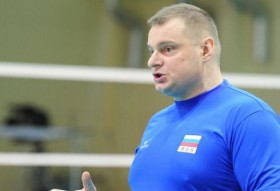 -I think that when you work in a professional and play at this level, every tournament, especially at the level of team is important – began Alekno. – We can not say, “Oh, it’s through-matches.” The upcoming World League Tournament will be two characters: the sporty and preparation. I have divided it into two phases. The first to be selected in the final. If we shall leave, there will be different. So now getting ready to hit the final.

– That is safe to say that the World League matches will be preparing for the Olympics?

– Of course. Look at what is happening around. All the major teams in Europe are preparing for the selection, because it is not guaranteed a place in London. Therefore, if we wanted to organize the own tournament, it would be for us, has not arrived. And we need competition to help prepare for the major matches.

– With staff were already defined?

– Some thoughts already. There are players for whom it is planned. There are certain positions that require strengthening. Just a tournament in Japan to help me with the final choice.

– And the Olympics are the chances of our team?

– Let us raise our eyes to heaven and asked it (smiles). And honestly, for such questions is always difficult to answer. It is good that you have not asked about the problem in London. You see, it’s a sport. I have before the task to pick up and make this team to a situation where we give the slightest chance to use it. Now we use it. After the failure of the European Championship we won the World Cup. Now there is a World League, is also a chance. At the Olympics, each meeting will be folded in different ways, and we need to do a little forward.

– How is the team divided? Who is going to Japan and Who to Anapa?

– In Japan, will go to those players who have previously completed a championship, and the guys who want to look at. There is no point to checking advanced Tetyukhin and Htey. A much more curious to see in Moroz, Kruglov, and Ilyin. Those who competed in the final championship of Russia, was granted rest. In fact there are reasons. With them we’re leaving tomorrow to Anapa, to prepare for the next stage. And all those who started training before the second of May, traveling to Japan.

– Protect the title in the World League will be harder than winning it?

– I agree. To us in the past, it is not particularly well treated. Matches was not all tuned and prepared. Now, when we have proved that Russia is a strong team, we will want to win everything.

RUS W: Women’s team of Russia in the qualifying tournament in Tokyo