After being official that Germany has withdrawn from the World League 2015, WorldofVolley contacted Vital Heynen, head coach of the German National Team. Charismatic and interesting as always, Heynen talked about reasons for withdrawing from the World League, but also criticized the current format of competition. 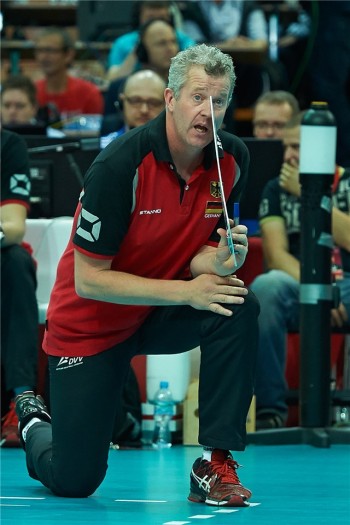 Why has Germany decided not to participate in the World League 2015?

“There are plenty of reasons. First of all the most important thing for the team is to play good games, and we were placed in the Group 2, in the same Pool with France, Czech Republic and South Korea. France is a big name in the volleyball world, but it would be hard for me to motivate my players to play against Czech Republic and South Korea. Also, it would all last for 10-12 weeks, and we would still not have chance to play in the finals. Because, from this season teams from Group 2 are not able to play in the World League finals, they are only competing maybe for promotion to the Group 1. I said ‘maybe’ because there is always chance that FIVB changes format again” – said Heynen and then continued:

“It was not so challenging. On the other hand, there is a very challenging tournament called the European Games. I think it will be a huge tournament, like Olympic Games for Europe. It will be a big test for my players to confirm the bronze medal from the last World Championship and I hope we will achieve good result there. Also, if we look on long-term, it is better for us to play there than in the World League. FIVB decided that the World Ranking has no sense. Because, the World Ranking is not used for the World League and it is not used for qualifying for the Olympics, so the only important ranking is the CEV ranking! And, on the European Games you can collect the same amount of points as in the World League. For me it is a logical choice, but also you need to have courage to be the only one to step out. We want to follow the path which we think is the best for the team.”

Do you think it was fair when Germany was placed into the Group 2 of the World League last year?

“At the moment of making groups we were 5th at the Olympics and 5th at the last World League! It was very hard to understand why was for example Iran, which was clearly behind us by every sport aspect, was nominated to be in Group 1. I found that very strange and I was disappointed. Because in Group 1 you play only top games, while we had to fight to get there. But I am not in the position to change it and just have to accept it” Heynen then stopped for a bit, and then continued:

“Top teams are saving their position. It is very, very hard to reach the Group 1. So if we decided to play we would firstly have to beat France, which would be very hard as France is an excellent team. And then, if we managed to do that we would still need to beat Bulgaria in the final battles. So we would need to be better than France and Bulgaria… I don’t know maybe it is my problem because I do not understand this format.”

“European Games and of course European Championship are our priorities. I think Germany will be even better than in the last year, because all my guys will be more experienced. We have a group of players which are at their best age. And, if you win the bronze medal at the World Championship, your goal can’t be to be 7th in European competitions. Right?

Repetition of finals from 2014 at start of new Grand Prix – Group 1!

Mr Heynen You are disrespecting Iran and Asian volleyball. sorry but that WEAK Iran defeated Brazil.Poland,Italy in world league several times. also USA(world league champions) in World championship and eliminated them from World championship.Iran has better volleyball foundation than Germany in ALL ASPECTS(look at junior and youth levels) Iran has ONLY ONLY Iranian players and we are proud that we don’t have players from other countries like HUNGARY. moreover if Germany will not have motivation to play against teams like Korea, be sure Brazil,Russia,Poland,Italy,USA players will feel like the same about your team ;-). see u in Rio2016

You showed a lack of respect for our national team, Mr Heynen…Try with young players, for example, if you can’t motivate Grozer & co…

bluewhitered did he hurt you? i think yes and his words means for you more than you can imagine. iran should have respect for women and human rights and then you can finally focuse on sport level

X so USA should be banned coz of racism :-).Poland should be banned coz of corruption.WOMEN are allowed in 2015 to watch.now what? that Ghavami case was not related to volleyball,whatever it was she is free now. the one hurt is Heynen.his rude words are not just again Iran but Korea and some other teams.Germany had the chance to qualify for group one just like France,but what did they do? they lost to Argentina,France and failed to qualify and now the coach is nagging he said: ‘At the moment of making groups we were 5th at the Olympics and 5th at the last World League! ‘ i would like to ask u to look at 2014 WL standings 😉