Bruno Rezende for WoV: “It’s good for Brazilians to play in Europe”

Bruno Rezende has returned to the Brazilian national team after his FIVB suspension expired. He was leading the vice-champions of the world in the match against Serbia, which his team lost in the tie-break. 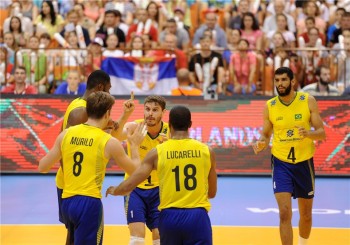 Rezende was obviously disappointed because of the final score, but as a true professional and a big sportsman he accepted to give a bit of his time for WorldofVolley after the match.

“We started the game very well with aggressive serve and good defense. However, Serbia was a totally different team than the one which played in Belo Horizonte. They performed a lot better this time. After the first two sets we stopped defending, while Serbia scored a lot of points by ‘tips’. We knew that they will do that but we still failed to defend. We are very disappointed.”

If anything is good for Brazil after this loss is that Bruno Rezende returned to the team. Still, one of the world’s best setters was self-critical.

“I am still not playing in my best shape. For example I did not have the best connection with Isac, because we still need time to get used to playing together. Perhaps Brazil would have scored a better result with some other setter.”

Regardless of the defeat against Serbia, Brazil has already secured the spot at the World League Final Six as the host. There, they will try to break the awful streak in the final matches. Recall that Brazil lost the last four major finals (Olympic Games 2012, World League 2013 and 2014 and World Championship 2014), so we asked a great setter to try to explain what is happening with his team in the crucial games.

“I think we are lacking a littlebit of experience. Today, our best attackers are very young and inexperienced. There are a lot of excellent teams in male volleyball and it is really difficult to win a trophy. So we need to continue playing on the high level, to keep our focus and to try to always reach the finals. At one point we will start winning them.”

For the end, we talked with Bruno about playing in Europe. As you all know, he is a player of Modena. From the next season Lucas Saatkamp will accompany him in the Yellow city, but the fact is that Brazilians are nowadays more determined to stay in their country than to go abroad. Rezende stated that playing in Europe can be good for his fellow countrymen.

“Maybe it is important to come to Europe, because there are more good tournaments here. For example, Italy, Russia, Poland they all have very strong leagues. It is good for any player to face such good teams and it would be good for our players to try themselves in such competitions.”