Heynen for WoV: „My rules aren’t bizarre, players need to learn something about themselves“

Vital Heynen is a unique figure in the world of volleyball. He’s an excellent coach with 17 medals on his account, both with clubs and German national team. 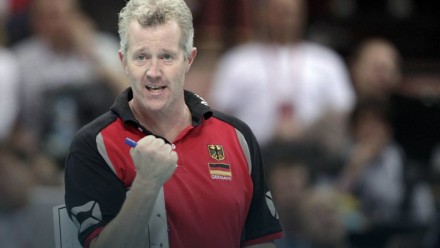 He’s also a very witty man on and off the court, always having some joke prepared for the journalists. Now, he introduced some strange rules to his players in German NT before the European Championship, which we called bizarre, but not in a negative context. Heynen contacted us and explained these methods called „Hell Week“…

„It’s my fourth season as the head coach of Germany and I always try to have new things for my players, to help them to be better. Then I asked myself – what would I tell them more so that they would be able to learn something new about themselves? The first logical step is that they find time to think about themselves. So, it’s good to put handys, iPhones, iPads, laptops, television, radio, all these distractions away and create time to think. The second is that you create moments in this time where there is no other choice but to think. Also with physical training you will focus on the sound of your body. So, those rules are not bizarre but a part of a concept,“ Belgian expert stated.

„Today, for example, we will visit a hospital in Berlin where we will meet children who have diabetes. My players will eat a healthy food the whole week. Nobody will eat chocolate, cakes and will drink only coffee, water, tea and won’t use sugar or sugar replacement, so that their bodies become used to eat only normal, healthy food. We will have to do that one week and those children are doing it their whole life. So, we will see how young children do this. In the evening, three homeless people are coming to tell what’s it like to live without the roof above you. I want to show my players the different aspects of our society and not only the nice volleyball life. So, I hope that after those confrontations they will start to think about themeselves. We even have some time to sit down and think about ourselves. Those are the moments of silence,“ Heynen explained how these rules function in practice.

„I don’t think there’s a direct effect of the rules to winning the Europan Championship. My hope is that in five years some of the guys will tell me – Hey coach, we learned something in that week, we learned something about ourselves,“ Heynen added and revealed that he gained the idea for the „Hell Week“ from a book of a Norwegian psychologist.

„I’m happy and my players are happy. We just had our training and my players are tired because they started day early, at six o’clock and a lot of new things that they are doing cost them a lot of energy. Mentally, we are not really sharp but I saw some things. I saw in the morning, around nine o’clock, that everyone were sitting on a the terrace. It was the first time that I saw that. They were really enjoing the sun,“ German head coach described how the rules affect his players.

Recall the article that caused Haynen to contact us with an explanation.

WC W: China and Japan with easy wins, 5 teams with the same score