Iranian national team failed to qualify for the 2016 Olympic Games in Rio through World Cup in Japan. Still, what hurts Iranian fans and volleyball public more is sudden lack of motivation that caused some embarrassing performances and defeats. It all ended with an unsatisfied placement on the tournament – Iran finished 8th out of 12 teams. Iranian Volleyball Federation and volleyball experts see head coach Slobodan Kovač as responsible. So, they are close to thank him for the cooperation. In an interview for our website, he shared his point of view. 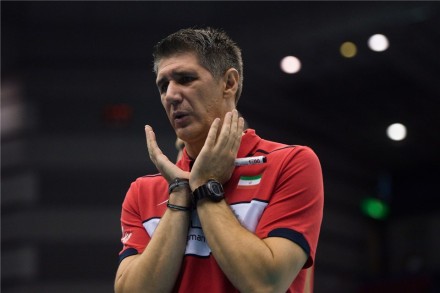 “I also think that it was a failure because I wanted Iran to qualify for the Olympic Games. It was our main goal. We still have some chances for that, in May, but it is going to be tough. No matter what, I believe that we can do it, but only if we play volleyball and don’t think about what happened before,” Serbian coach said.

“Before the World Cup I was optimistic because, for example, we beat some top team in friendlies, like Russia, but as long as my players don’t change their attitude and way of thinking they won’t make any progress. When they came to Japan, they all woke up with only one thought – we will beat Argentina easily. They didn’t think about their own play. When they lost this game, everything went downhill for them like they didn’t have to play 10 more games. Before every next game I tried to regain their confidence, to explain them that nothing is over yet, but there was no rescue for them and that’s how they finished the tournament,” Kovač added.

“I have always been giving my best. Iranian Federation has a problem with me because I hired my compatriots as assistants and they want Iranians to be in the coaching staff. We are 8th on the FIVB’s ranking list at the moment and it is a better placement for three spots than before me. So, they have to be more realistic. They can’t have all at once. They think that this was a failure? OK, no problem, that’s the end of story. I won’t argue with them, because it’s hard enough to be a foreigner in Iran. But, they forget one thing. At all three major tournaments – World Championship, World League and World Cup, I didn’t have my first opposite hitter Shahram Mahmoudi available and without him it’s difficult. At first two competitions he had an ankle problem, but in Japan he suffered a back injury, which he has never had before,” Kovač spoke bluntly about his status on Iranian bench.

I have no idea why he thinks it’s hard to be a foreigner in iran because we Iranian like him. Also, I’m sure the federation won’t terminate contract with him.

I think he is right.without mahmoudi it was very difficult.he is smart and very fast and spikes with 1 or 2 pace.I hope they can get succeed again.I like this team

‘Iranian federation need to be more realistic’! Come on! You ruined a very good team! You lost to Australia (while Iran C team beat them in Asian championship) and Canada and gave two sets to Japan! You lost to Argentina! You lost to Poland while team had won two first sets! Why did you take 4 middle blocker and only two opposites to World Cup while you knew about Mahmoudi and Ghafour injuries! Your assistants are awful! Their resumes as a coach are awful!

I don’t know about Iranian fed but It seems that Kovach has some problems in managing this team. for example it seems that their team always get warm after 2 lost set! or if one of the players make 1 or 2 mistakes they all get disappointed !! I really agree with their fed about an Iranian assistant.I understand him about their opp Mahmoudi but its not wise when you have 2 injured opp you take 4 mid blocker and don’t use them!