Interview conducted with volleyball legend Gene Selznick on aspects of today’s game and how they compare to earlier times. Alexandra Ayers played on Gene’s team from 2000-2005. 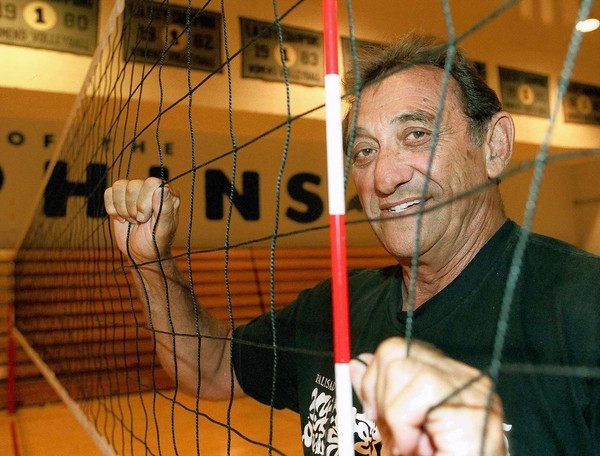 Alex: Which is better: sideout or rally scoring?

Gene: Sideout, because you have to earn it. You aren’t earning a point when the ball hits the net and falls over. It takes more work. You have to learn to dig. Defense is a lost art.

Alex: What’s something you would change about the game today?

Gene: Two liberos. Two would be better because there’d be twice as much defense. It would piss off the hitters and we’d have a better ball game.

Alex: What’s different about the game now compared to when you played?

Gene: You know when the ball hits the tape and goes over? I did that. In Hermosa Beach, all the guys would jump serve into the net or hit the tape. So I told Sinjin Smith, ‘let that ball play!’ They’re not getting any rallies, the game is dull…the next week they put it in the rules.

Alex: What do you think about passing in today’s game?

Gene: Players shouldn’t be able to throw the ball at all. You should be able to do it right! We did it right. Now people just throw the ball. Since they have bad coaching, overhand passing became one of the worst skills in volleyball. The game they play today, you could never have played years ago.

All your skills have gone downhill. Setting is weaker. Hitting is the only thing that’s kind of comparable. Defense is just terrible. The only thing stronger now is serving. It doesn’t help that the referees don’t know how to call overhand passing. I watch the game, and I start laughing. They tell the refs not to call anything so you kids get away with that crap and it gets real crazy. There are some girls that will be good and some that’ll never be good at passing. Some are just natural. You can develop your passing and learn the footwork. If you don’t move your feet you can’t pass the ball.

Alex: What’s a problem you see with coaching today?

Gene: Coaches don’t know how to teach. Therefore they think they should use their time conditioning the team instead of coaching. I’ve beaten all those teams. If a player isn’t a jumper, you need to teach them how to reach. You’re wasting time teaching them how to jump.

Alex: Even in college you don’t think players need to be in a weight room?

Gene: I think they should hit. College coaches that have a great team, that team came to them, they didn’t make it themselves. The girls have already been trained.

Alex: Some coaches argue that lifting makes you a stronger player.

Gene: It might give you some extra power on a ball or two. But you don’t get the same reach, power, or approach on every ball. Playing is what will make you smart. I’ve never lifted a weight in my life and I was the quickest guy on the court. To become a good volleyball player, it’s really simple. If you’re coordinated and have the ability to play a sport, what you have to do is get the mechanics right: the approach, the reach, and the snap, how to turn the ball; those all have to be right. It takes a lot of practice, but it’s simple.