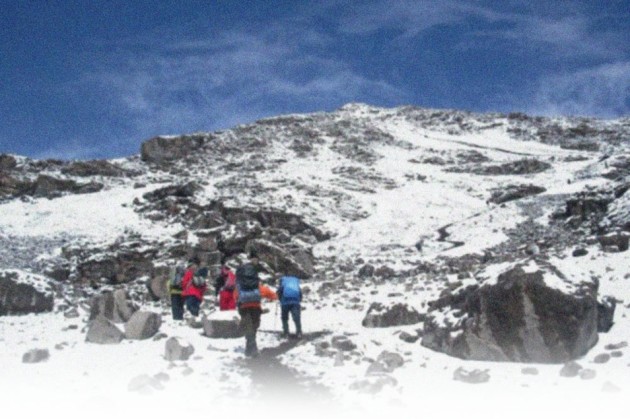 Summit day for Doug Rhoades and his group on Mount Kilimanjaro

Muhammad Ali famously said “It isn’t the mountains ahead to climb that wear you out; it’s the pebble in your shoe.” This quote about perseverance and the little things that can trip you up along the way struck a chord with Doug Rhoades. An avid hiker, this club and middle school volleyball coach from Peoria, Ariz., encountered many pebbles along the way, but never gave up his dream of achieving something significant.

In November of 2010, after a courageous seven-year battle, his mother died of lung cancer. It was around this time Rhoades said he read a story in the newspaper about a couple of ex-football players hiking the highest mountain in Africa.

“I was intrigued by Kilimanjaro. Immediately I thought of climbing it in honor of my mom”, he said. “In announcing my intention, my son Josh expressed considerable interest.” After the two bonded over the idea, Rhoades immediately started researching Kilimanjaro, made arrangements for a July trip and created a tandem workout program.

His hike set eight months away, Rhoades encountered a setback. In mid-December he went to the doctor after experiencing recurring groin pain. His doctor ordered an ultrasound that revealed a mass in the lower lobe of his right lung. The ultrasound was followed by a CT scan, which confirmed a pulmonary mass. On Feb. 9, after hearing the options from his doctor, Rhoades opted for a lung biopsy, which was performed on Feb. 23. The mass turned out to be a cancerous tumor; a PET scan confirmed that the cancer had metastasized to multiple lymph nodes and that it was stage three lung cancer.

Rhoades said he felt like his life was falling apart.

“I was in shock when I was told that I had cancer. I did not believe it”, said the 55-year-old non-smoker who had experienced no related symptoms. “How can I run 12-16 miles a week along with hiking 10-12 miles a week and coach volleyball without any issues, but have lung cancer?”

Rhoades said his thoughts then turned to his mom, and what he had witnessed during her cancer battle during the past seven years: having taken her to all of her doctor appointments, treatment appointments and caring for her in her final days.

“It was a very dark and emotional day for me”, he said.

Rhoades shared the news with his family and told his son they would have to reschedule the trip. But something else dawned upon Rhoades at that moment.

“After the initial shock wore off, I decided that I was going to win my battle with this disease”, he said. “I am young and I am in very good physical condition.”

His treatment, which involved both radiation and chemotherapy, lasted from March 31 to mid-May. Rhoades partnered naturopathic treatment, which included taking various vitamins and supplements and incorporating cancer-fighting foods into his diet, with conventional medical treatment.

And Rhoades made his best effort to continue his volleyball workouts. At the beginning he kept up his full regimen but by mid-May the treatments had worn him down to the point where he was unable to work out at all and could only walk short distances. But as the treatments waned, he went full bore again, hiking into the Arizona mountains and running more often than walking. He wanted to complete the Kilimanjaro hike in October; his mind was made up.

“During my final appointments with my doctors I was confident that nothing was going to stop me from being able to attempt the climb in order to honor my mom and also to show defiance to my cancer”, he said.

Rhoades said his final appointments prior to the climb with his radiation, chemotherapy and naturopathic doctors went well. They were impressed that he was attempting the climb less than five months after completing treatment, and gave their approval for the adventure. Rhoades said his pulmonologist did express concern, and he was worried the doctor would advise him not to go.

“I was pleasantly surprised and filled with renewed confidence when he gave me his approval to attempt the climb”, he said.

With the green light from his medical team, Rhoades and his son left for Africa.

Rhoades’s son Josh had taken up a training program to get in shape for the hike, sometimes working a 12-hour shift, and then getting in a 10-mile run.

“I thought about how lucky I am to have the opportunity to be an example to people who face serious health issues that you don’t have to give up; it is possible to do remarkable things”, Rhoades said.

Rhoades called the first four days of the hike “a piece of cake”. Day five was a chore in freezing rain. At midnight of day six in a blizzard-like snow, a 1,200 meter climb to the summit was in front of them.

“It took every ounce of energy and determination I could muster to summit Kilimanjaro”, he said. “I had two voices talking to me: One telling me to stop, the other telling me I could do it.”

At the summit he said he ran the gamut of emotions.

“I had emotional thoughts of my mom; exhilaration that I was able to make it with my son to honor my mom and leave a picture of her on top of the ‘Roof of Africa’ and thoughts of family, friends, and doctors who provided support, encouragement, and treatment that made it all possible”, he said.

Despite having this goal accomplished and behind him, Rhoades is continuing to face health issues, but now approaches these setbacks with a different frame of mind.

In early March a scan revealed that lymph nodes around his lungs contain the same cancerous cells, and he will begin undergoing another round of chemotherapy.

“I am feeling great physically and my mental state is coming around, wrapping around the task at hand to win round two of my battle with this disease”, Rhoades said, adding that he is looking forward to getting back to an active lifestyle, which includes coaching 14-and-under girls’ volleyball.

“As in my everyday life, my experience has led to a mindset where I savor every day more than I used to”, Rhoades reflected. “In coaching I savor every practice more, having the chance to have a positive impact on improving a player’s skill level and their enjoyment of the game of volleyball as my coaching career could end earlier then later.”

Through it all, the soft-spoken coach has kept a mantra he continues to live by, whether battling cancer, coaching volleyball, or taking on a 19,000 foot mountain.

Magic spike from 8 meters by Ivan...

ECH W: Seats are getting taken