Marek Kardos, AZS Czesochowa's coach shared his thoughts on his team and the next volleyball season. 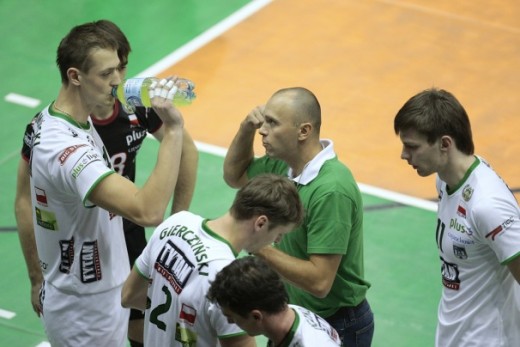 – You completed the preparations for the new season. After these two months, is your team ready?

– Of course it is. We need time to rip the whole team, because young players do not have much experience in the game at a high level. We need to work on the rip and eliminate silly, simple mistakes that could be seen even in this Wednesday’s match with Bedzin.

– The problem for your team was that in the initial period of preparation not all players were present. Juniors joined you at the beginning of September.

– That’s right. When Dawid Murek and Andrzej  Stelmach play our game looks completely different. However, all the players have to be ready to play at one hundred and twenty percent. We have a lot of work.

– There’s no denying that these young players are thrown into the deep end. They will get a lot of opportunities to play, players like Marcin Janusz, will he be the first setter?

– We will not have a first or second setter. The best will play. Will it be Andrzej Stelmach, or Marcin Janusz it does not matter, because they both play very well.

– The transition from the junior game to the level of first-class games for younger players is a difficult task.

– They must train hard. Several players need to work out the technical elements. Only after completion of this task, we can go to the tactics.

– At present, you have only one attacker, which is a risky move, because the league season begins in a few days. When can we expect a new player on this position?

– It is true that it is a big risk, but if I have a variant that Michał Kaczyński will play in this position. We are constantly looking valuable volleyball players. There’s no denying that the market is very small, and the players are already contracted.

– On Saturday, October 6 the league season starts. Your opponent will be Delecta Bydgoszcz team.

– Delecta Bydgoszcz is a team that has nearly the same players. There’s no denying that they are the favorites in the game. We will fight for every point in this match.

– On Wednesday, you played your first game in the new hall. How does it feel?

– Hall is a very nice, well-equipped. Not missing anything there. We will do everything in our power to bring the fans to come to our games. We want them to see our good play, not just visited the new facility. My goal is to get AZS back on a pedestal.