Tijana Malesevic spoke of PTPS Pila, Poland, Serbian and Polish national teams. She was the MVP in a match against KS Palac Bydgoszcz. For more latest volleyball news visit worldofvolley.com 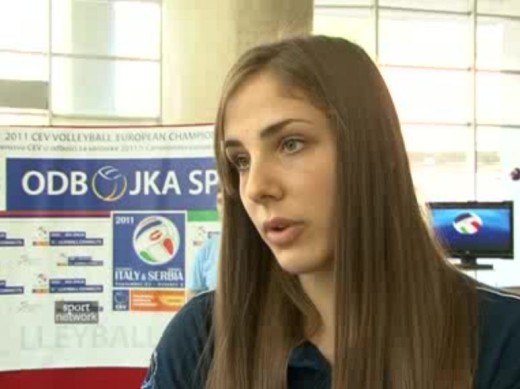 “After talking with my manager I decided to play in Pila for the next two seasons. He told me a lot about the plans and objectives of the team. The club is professionally organized, run by a good coach. I like challenges. Our goal is to be among the first five to be able to fight in the European Cup, and maybe even the Champions League” Tijana Malesevic said.

– In Orlen league there are players from the Serbian national team. Did you ask them, about the situation in Poland before signing the contract?

– Vesna Djurisić told me how good it is to play in Poland. The worst thing is the travel – long and tiring on the bus, five hours, or even eleventh. The rest is really good. I talked to a friend of mine from Belchatow Atanasijević. He also confirmed that life is fun here. People are nice. It turns out that Poland is a good place to live and play volleyball (laughs). Volleyball is very popular, and I can still evolve.

– How would you like to present yourself to the Polish fans?

– Step by step, game by game, I would like to show my best side. I hope that I will be one of the volleyball players that will take the team to the European Cup, and we will compete with the strongest European teams. I like it here. Volleyball is my profession, which also gives me a lot of satisfaction and joy.

– Serbia is the European champion. You will play with Poland in the same group in the continental championship. What are your plans for the national team?

– We won the gold medal and show our best side in the World Grand Prix. Both of our teams won the championship of Europe. Serbian volleyball at the top of Europe (laughs). We have a great atmosphere, which motivates us to play our best. We are in a strong group – will face Poland and Bulgaria. It certainly isn’t going to be easy.

RUS M: Zenit KAZAN in bad mood while getting ready for debut match