RUS M: Zenit KAZAN in bad mood while getting ready for debut match

After a weak performance at the FIVB Club World Championships in Qatar, Zenit KAZAN switches to the CEV Volleyball Champions League. They will play a home match against Belgian club Knack ROESELARE. Vladimir Alekno's team lost to PGE Skra Belchatow and Diatec Trentino. Alexandar Volkov had a surgery, and Yuriy Berezhko is uncertain. 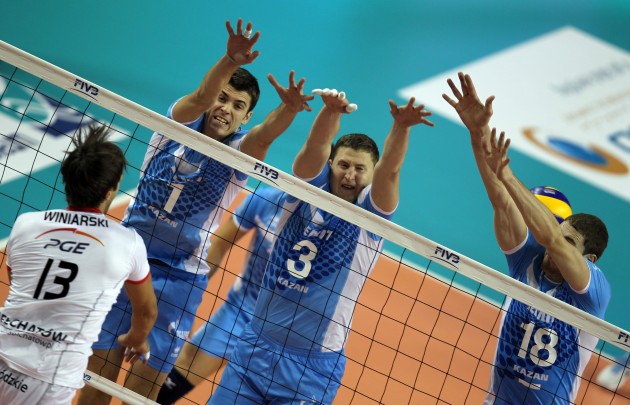 In Doha the team of Vladimir Alekno did not show its best Volleyball and lost all three important matches. The Russians lost their group stage match and the match for the third place against PGE Skra BELCHATOW of Poland and both with the same score – 2:3. The semi-final match against TRENTINO Diatec ended up with an utter defeat of Zenit KAZAN – 0:3, leaving the players from Tatarstan rather dispirited.

“Since the very beginning of the season we have been playing really inconstantly” says the Italian setter of Zenit KAZAN Valerio Vermiglio. “We are on a roll in one set, but might make disastrous mistakes in the other. It is very bad. Our team is not in the best shape at the moment. We played slow in Qatar. And if you don’t have the speed needed, in every rally you will fall a few seconds behind your opponent. Together, we must put right the wrongs and to please our fans play well in the remaining tournaments of the season”.

Zenit KAZAN leads in the national league having won all of their four matches so far. Knack ROESELARE is similarly successful in the Belgian league as it shares the lead with Noliko MAASEIK. Last season Knack ROESELARE sealed the national championship only in fourth place but got a wild card to participate in the Champions League.

The team from Kazan has already played against teams from Belgium at the group stage of last season’s Champions League. Euphony ASSE-LENNIK was beaten twice – 3-0 at home and 3-2 in the away match. Two new wing-spikers of Knack ROESELARE – German Dirk Westphal and Belgian Gertjan Claes – participated in those matches. It is not clear yet if Zenit KAZAN spiker Yury Berezhko will take part in the match against Knack ROESELARE. At the tournament in Doha he had problems with his knee. Earlier this month, Alexander Volkov underwent surgery on his knee. Now he will have to go through a long recovery, which will take about six months.