WL: Glenn Hoag – “We are ecstatic about being here”

Canada will make its historic debut in the six-country FIVB World League Final men’s volleyball tournament on Thursday against Russia, the Olympic champions. 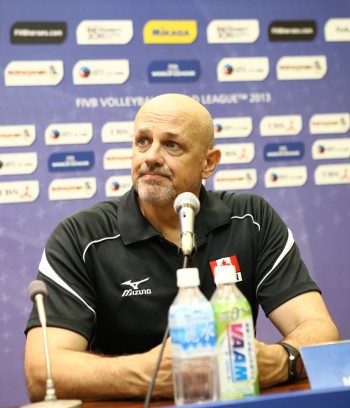 The Canadians reached the final by placing first in group C during the preliminary round with a record of eight wins and two losses and they enter the Final riding a six-match winning streak. In the prelims Canada split two-match series with the Netherlands in Quebec City and Portugal in Mississauga before sweeping South Korea, again in Mississauga, as well as Finland and Japan overseas.

“Of course, we’re ecstatic about being here,” said Canada’s head coach Glenn Hoag. “We have a young team and this is our first year in the building towards the Rio Olympics and the guys are getting a great experience. The hard work continues as we play some of the top teams in the world.

In the Final, Canada is in a powerful group with the Russians and world number-one Brazil. The other group is comprised of world number-three Italy, Bulgaria (#8) and Argentina (#9).

Atanasijević – “The best fun ever”