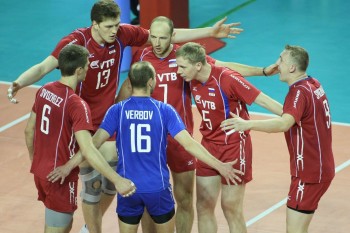 Nikolay Pavlov set the tone for the rest of the match by scoring the first point. Russia took a 1-0 lead (25-17).

In second set, all eyes were on referee Frans Loderus at 21-19 as a toss ball was changed to a Brazilian point. This forced Russia coach Andrey Voronkov to call on Mikhaylov for the first time in the World League. Although Muserskiy recorded an incredible ace to make it 24-22 to Brazil, a Lucas block soon sealed the deal 25-23 and tied up the match at 1-1.

Another Russian star in Sergey Grankin was called upon in the third set but again Brazil were dominant at 16-12. A monster block from Pavlov helped Russie pull within one at 18-17 before Ilia Zhilin also contributed with his own block to tie the scores as 21-21. However, the 28-year-old footfaulted at the next serve before Verbov’s bad reception and Grankin’s serve long gave Brazil the third set 25-22.

Voronkov rallied his troops in the fourth set as Russia streaked to a 11-6 lead. The passionate Alexey Spiridonov was red carded at 19-11 but another Pavlov spike off a Lucas block sealed the fourth set 25-19 to take it to a decider.

In tie-break, it was even until Pavlov opened a two point lead at 11-9. Two spikes from Spiridonov gave Russia match point at 14-11 and they needed only one with Pavlov serving up the winner over a Fonteles block.

The Intercontinental Round third best scorer Nikolay Pavlov continued in the same vein by top scoring in the match with 27 points with Muserskiy the next best with 14. Wallace, Lucas and Lucarelli top scored for Brazil with 13.

To read more news from this competition click on World League 2013.

See the galery from this match below.

WL: Glenn Hoag – “We are ecstatic about being here”