World No. 7 Serbia regained their rhythm on time to overcome the No. 8 Dominican Republic resistance in a thrilling tiebreaker (25-20, 20-25, 25-12, 23-25, 18-16) in their classification match for 5th to 8th positions of the FIVB Girls' Youth World championship at Chatchi Hall in Nakhon Ratchasima, Thailand on Saturday. 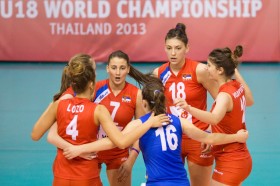 Serbians after scoring the point

Now Serbia will play for the 5th and 6th position against Japan, while Dominican Republic fight for the 7th and 8th positions in front of Poland.

Serbia’s big gum Tijana Boskovic contributed 26 impressive points for her team but more over she was the saving tool of the match through her gallant show in the critical time specially during the tiebreak. She was the match and her team scorer followed by Bojana Milenkovic who scored 18 points.

As regular, Super attacking weapon Elizabeth Martinez was Dominican’s scorer with impressive 25 points followed by the opposite spiker Gaila Gonzalez 14.

Serbia led the match in the first set and succeeded to organise their combinations through their efficient spikers by the net to win the first set 25- 20. Dominican started their real fighting in the second set when they won the set using their big hitter Elizabeth who started to work late to draw 1-1.

Again Serbia looked paving the way towards a 3-1 win when they passed the third set easily 25-12 and led several times widely in the fourth set. But as usual the Dominicans are not the team to collapse, as they came back bravely to win the fourth set and extend the match to tiebreak

Although Serbia had early advance but again the Caribbeans saved three match points before they lose dramatically 18-16.