Puerto Rico put in an impressive form against Egypt to overpowering the higher-ranked rivals in grueling four sets 22-25 26-24 25-12 25-22 in the 13th-16th classification round of the Girls’ U18 World Championship at the Liptapanlop Hall on Saturday. 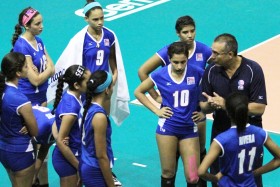 Puerto Rico, which finished 15th in the previous episode in Turkey two years ago, performed impressively in their tough match against Egypt. The Egyptians, whose world junior ranking is 12th against the rivals’ 28th, played well up to their level. Sarah Hanafy became a smashing machine for Egypt to help her team take the hard-fought first set 25-22.

It was a matter of overcoming nervousness in the first set which helped Puerto Rico improve their form and fortunes in the second set. An offensive mobility mixed by devastating spikes from Genesis Miranda and Karla Santos and the Paola Rojas’ solid blockings assisted the Puerto Ricans to win the tight second-set contest 26-24.

The third set was totally dominated by Puerto Rico after the Egyptians became more prone with unforced mistakes. The Puerto Ricans took the third set without much trouble 25-12. The fourth set turned out to be tough again, but Puerto Rico played cool under pressure. Leading narrowly 22-20, the Puerto Ricans never looked back to allow the rivals only two points to capture the set 25-22 and the exhausting match.