The International Volleyball Federation has issued an update to the FIVB Volleyball Junior and Youth World Rankings for women following completion of the Girls’ U18 World Championship that took place in Nakhon Ratchasima in Thailand from July 26 to August 4 and the Women’s U20 World Championship, which took place from June 21 to 30 in Brno (Czech Republic). 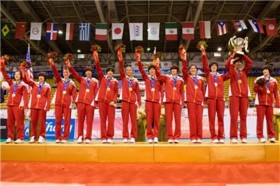 China in the top of FIVB rankings

The top two countries in the Women’s Junior and Youth World Ranking are unchanged with China and Brazil maintaining their first and second position respectively.

The major changes see Japan move up the table from ninth to third place, following their second place finish at the U20 Women’s World Championship. Peru also moved from tenth to sixth place after reaching the semifinals at the Girl’s U18 World Championships.

Formerly in third place, Italy has now dropped four places and is positioned seventh in the ranking sharing this position with Serbia. Chinese Taipei moves up seven positions to take tenth place on the table.

For more information from all over the world, read Latest news.

Check out TOP 10 volleyball Aces over...