GP: Brazil – back on route 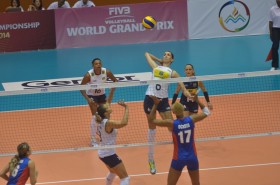 The straight-sets win was crucial for Brazil to keep them in touch with the World Grand Prix  top six with just one preliminary round of matches left before the tournament finals in Japan.

Brazil started the match with their regular starting lineup of Thaisa Menezes, Fe Garay and deluxe libero Fabi, while hosts Puerto Rico were full of errors.

Brazil were ahead 16-9 at the second technical time-out thanks to an error by Puerto Rico captain Yarimar Rosa, and went on to win the first set 25-14 – the first time they had won the opening set of a match in the 2013 World Grand Prix.

The 2012 World Grand Prix runners-up scored easily at the start of the second set and opened up a 10-2 lead that they converted into a 25-15 set win to move ahead 2-0 in the match.

The third set was very similar to the second one, with Puerto Rico trying to stay in the match, but the fast game of middle blocker Thaisa Menezes maintained Brazil’s strong offence, and they claimed the set 25-17 and the match 3-0.

For more information about this competiiton, read World Grand Prix 2013.

GP: For big matches it is necessary to play harder – said Terzic