Tsvetan Sokolov recovered from a slow start to lead the scoring charts of the winners with 20 points, followed by Filippo Lanza’s 16 tallies. Michele Fedrizzi, who was not in the starting lineup, contributed 13 points, while Emanuele Birarelli and Sebastian Sole chipped in with 12 and 11, respectively. Theo Lopes and Martin Ramos were the only two players of UPCN who reached double digits in the scores with 18 and 10, respectively. 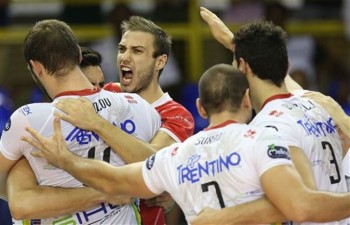 Trentino outblocked UPCN 13-5 with Birarelli and Sole each registering five blocks. The winners held a 62-49 advantage in attacks to make up their 35 unforced errors to only 17 by UPCN.

UPCN led 8-6 thanks mainly to the spike and ace by Theo Lopes. The Argentinean club increased to 12-8 behind the spike by Lopes and block by Alexandru Olteanu against Tsvetan Sokolov.  Trentino cut the distance to 12-10 when Alexandre Ferreira combined spike and ace. UPCN led 16-15. Back into action, Sokolov and Filippo Lanza scored consecutive spikes giving the advantage to Trentino 17-16. With the score evened at 22, Ferreira landed his spike and Sokolov blocked Olteanu. Lopes’ attempt sailed long and Trentino took the set 25-23.
UPCN was in front 8-7 in the second set. Two consecutive blocks by Sole against Ramos and Lopes gave Trentino the slight margin 10-9. UPCN came back to regain the lead at 13-10 thanks to attack and block by Ramos combined with two opponent errors. They were in front 16-14 at the second TTO. At 20-18 Ramos scored with spike and ace to seal the set. UPCN won it 25-23 despite the Trentino reaction led by Lanza.
Michele Fedrizzi broke a tie at 7-7 giving Trentino the small advantage at first TTO of the third set. At 13-13, Sokolov scored with a soft spike and then Lopes and Olteanu missed with their spikes to give Trentino the advantage 16-13 at the second TTO. The Italian based team won the third set 25-21 thanks to the attacks by Lanza and Fedrizzi around a block by Sole against Nicolas Lazo.
UPCN led 8-7 in the fourth with the good blocking by Ramos and Santos. Trentino evened at 8 with the attack by Sokolov and later took the lead 12-10 with two spikes by Fedrizzi. The Italian club as in front in the score 16-14 at the second TTO. They never looked back and took the set 25-19 with Sokolov’s hot arm in the latter stages.