CL W: “We gave everything we had”

The most exciting game in yesterday’s schedule of CEV Champions League was seen in Poland, where Volero beat Dabrowa Gornicza after five sets. 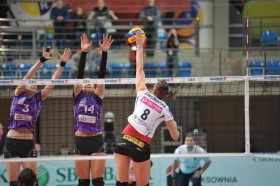 After the match both coaches were satisfied with the way their teams played:

“Of course I am not satisfied with the final score, but I am happy because we played as we wished and had agreed while taking on a very strong opponent. Tonight we gave everything we had” said Nicola Negro, coach of Dabrowa Gornicza.

On the other side, his opponent explained what was the decisive factor:

“With the inputs from their new head coach Dabrowa Gornicza played much better than they had done last week in Switzerland” stated Volero mentor Dragutin Baltić. “It was a nervous and tense game with a lot of mistakes. In the end we won because we wanted it more.”