Fred Sturm has left the Danish national team on December 18th after spending ten years at the helm of the group. Exclusive for WorldofVolley, Sturm speaks about the reasons of leaving Denmark NT, future plans and etc. 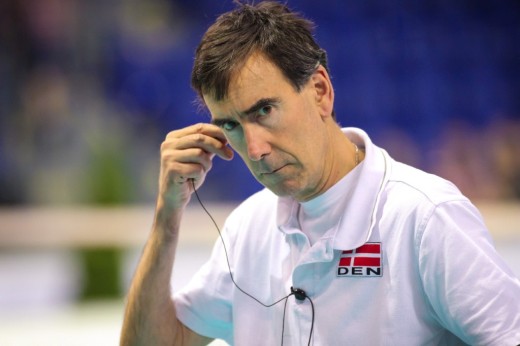 Why did you leave national team of Denmark?

“Many things in our world have an expiration date and my job as Head Coach for the Danish Senior Men’s Team was no exception. There are two main reasons for stopping now: Danish Federation has decided to reallocate its finances available to the Danish Senior Men’s team. The full time head coach position has been terminated in favor of creating the best possible environment for preparation and competition activities for the Team. “ revealed Sturm and continued:

“The second reason is this coaching change comes at a good time. Hosting the European Championship brought to an end a very special long-term project for our Senior Team.  Now is a good time to begin a new project with a new coach. There is a good balance in the composition of young and experienced players on the Senior Team. Many of the future Senior team candidates are young and could play for many seasons in the future. This is a good time for a new to coach to start work with and develop this group of young, promising players. For our experienced players a new coach could  be the perfect motivation to prolong their playing careers on the Senior Team.”

What is the biggest achievement with the Danish National Team?

“I would prefer to use the word highlight. There are two highlights that come to mind.

First, the decision made by CEV to select Denmark and Poland to co- host the 2012 U20 European Championship Final Round  Championship and the 2013 Senior European Championship Final Round. Championship. Co-hosting two Final Round Championships was a great achievement and a big highlight.  The whole selection process took years of careful preparation and took a lot of great work from many passionate people under the leadership of two people, Mikael Trolle and Erik Jacobsen. This decision marked the first time the Danish Volleyball Federation would host a major international volleyball event. Not only did the Danish Teams get to participate in these two Final Round Championships but also, just as meaningful, top class European indoor volleyball was coming to the Kingdom of Denmark for our volleyball community to watch first hand.

Second was the 12th place result made by the Danish Senior Team in the European Championship.  That result was a great achievement but what makes it so special is what it took from each one of us to achieve that result.  Going into this event, our season had been filled with its share of disappointments, unfortunate injuries and other setbacks.  Our team unity, confidence, courage, commitment and perseverance were all put to a severe test, both on and off the court. The response to all the adversity was phenomenal. The team rose to the occasion and played its best volleyball of the season.  I am thankful to every member of the team for their much appreciated contribution to this very special team achievement. The team represented the Danish Volleyball community well and have made so many people feel proud.”

Could you compare national team from ten years ago to this one now?

“When I began coaching the Senior Team, it was already very good.  All of the players were well educated and well developed in their skills. The biggest difference from the first season to the last one has been the big investment the Danish Federation has made to the long term talent development of our future players.  The impact has been already beneficial for two reasons.  First the new players who join the Senior Team are much more developed and better prepared for Senior team level than ever before.  Second, our group of Senior Team candidates is larger than it has ever been before.”

What are the goals of the Danish volleyball?

“One important goal is to continue the growth and development of Danish indoor volleyball.  This was a major reason for making a bid to host the two European Championships.  Hosting these championships was a good beginning but there is still much more work to be done. For example, it will be important to continue to bring top class indoor volleyball events to the Danish community.  Another important goal is to further professionalize the Danish professional men’s and women’s leagues.  Many good decisions have already taken, but this will be a long term development process and a very important goal to achieve.  For the National Teams the goals established by the Federation are ambitious. To participate in every FIVB and CEV qualification event is one goal.  It has always been a target goal to qualify for the CEV European Championship Final Round.  One other important goal will be to have the best preparation and competition programs for the Senior Teams.  It will be important to have the best players available to the team during the most important events.”

What are your impressions about this year’s European Championship?

“There are so many teams capable of playing great volleyball. This fact makes the event so interesting to follow. 2013 is the first year of the four year Olympic cycle. It is a transition time for many teams, a time to try out new players, for example. Right now the Russian Team is the team to best. But there are many other teams capable of playing to their level. The teams of Italy, Serbia, Bulgaria, Germany, Poland and France are just some of them. It will be interesting to find out how these teams will progress during the next three years.”

Are you staying in volleyball and do you have any idea where could you continue your career?

“I do not know yet. I have some responsibilities to finish here. In the meantime, we will take things one day at a time. The only thing I can say for certain is that whatever decision we make in the future will be a family based decision.”

Did you visit our website and what do you think about it?

“Yes, and I am very impressed with what I have seen. There is something for every volleyball reader. Great work!” finished Sturm.

Check out the WoV Community profile of Fred Sturm.

POL M: Asseco Resovia to get new hall in Rzeszow

Santarelli for WoV: “I think we have...