The third and last stage of the World Champs qualification process is spreading a real Volleyball fever across Europe and a series of exciting matches are coming up on Sunday to determine the final composition of the European contingent for the 2014 FIVB Volleyball World Championships scheduled for September/October in Poland and Italy for men and women respectively. With the host countries already pre-qualified together with the gold and silver medalists from the 2013 European Championships – Russia and Italy (men), plus Russia and Germany (women) – there are another six and seven berths still at stake for the Men’s and Women’s World Championships respectively. 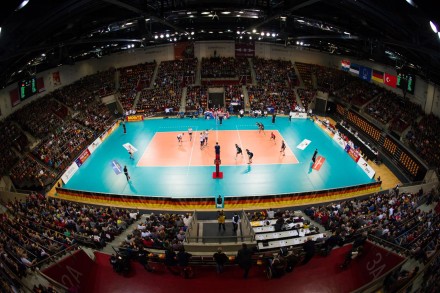 After their straight victory over the Netherlands (25-19, 27-25, and 25-14), Bulgaria tops the charts in Pool I in Opava where the fourth-ranked from last year’s European Championship still haven’t dropped a set after two rounds. After losing their opening game to the “Oranjes”, the hosts of the Czech Republic got back on track with an easy straight victory over underdogs Cyprus (25-18, 25-21, and 25-16) and will play Bulgaria on Sunday for what looks like a “mission impossible” as they still hope to be able to claim a ticket to the World Champs.

On Saturday the European bronze medalists of Serbia beat Slovenia in straight sets (25-20, 25-19, and 26-24) in their second match at the Cair sports hall in Nis and with this result – combined with Portugal’s straight victory over the F.Y.R. of Macedonia – they cemented their leadership in Pool J. On Sunday, as they play Portugal they will need to take only one set to book their spot in the Final Round of the 2014 FIVB Volleyball World Championship. The match starring Serbia and Slovenia was attended by more than 5,000 fans and with this home victory Serbia also got their revenge for the defeat they had suffered to Slovenia in the pool phase of the 2013 CEV VELUX Volleyball European Championship last September in Herning, Denmark.

3,123 enthusiastic fans celebrated an outstanding performance by the German national team on the second day of the World Championship qualifier – Pool K in Ludwigsburg. The players of head coach Vital Heynen demonstrated their strength with a 3:0 (25-18, 25-18, and 25-17) victory over Estonia and are now only one win away from making the Final Round of the 2014 FIVB World Championship in Poland. In the second match of the day Turkey won a dramatic five-setter with Croatia (25-21, 19-25, 25-27, 30-28, and 15-13) to keep alive their chances to make it to the World Champs. In the fourth set Turkey survived to four match balls for Croatia and fought back to claim their second consecutive victory in Ludwigsburg. After two consecutive setbacks, Croatia and Estonia are out of contention for a ticket to the World Champs.

Turkey and Romania will play for first place in Pool I on Sunday after these sides edged Ukraine and Cyprus respectively on the second day of the World Champs qualifier in Ankara. The home heroines of Turkey scored on Saturday their second straight victory at the Baskent Volleyball Hall as they beat Ukraine in straight sets (25-7, 25-12, and 25-21) in 62 minutes of play to re-assert their ambition to make the Final Round of the 2014 FIVB Volleyball World Championship. Romania also claimed their second win in the tournament as they easily got past Cyprus in straight sets as well (25-15, 25-17, and 25-9).

Azerbaijan and Serbia prolonged their winning streak at the World Champs qualifier taking place in Baku (Pool J) as on Saturday they scored a second victory in the tournament and will fight for first place on Sunday as they cross their ways in the last round of action. The bronze medalists from the 2013 FIVB World Grand Prix, Serbia routed Israel in three straight sets (25-9, 25-12, and 25-20) before the hosts of Azerbaijan downed Estonia with a similar score line (25-17, 25-19, and 25-13).

On Saturday, the second day of the tournament at the Atlas Arena in Lodz, Belgium crashed Switzerland 3:0 (25-11, 25-16, and 25-12) to keep an immaculate record in the competition. A few hours later the hosts of Poland did the same with Spain (25-13, 25-12, and 25-18). With these results the Poles and the Belgians are set to go for a big match on Sunday for first place in Pool K whose winners will make sure they qualify to the Final Round of the 2014 FIVB Women’s World Championship.

Every match is a must win, says...