CRO W: Vercesi “My only goal is gold medal”

Angelo Anibal Vercesi had a successful start as the head of Croatian national team. 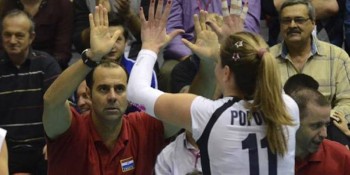 Brazilian coach has taken Croatia to the World Championship, but that doesn’t mean the main goal is fulfilled:

“There is a lot of quality in these players, and that is the main reason I came to Croatia. Money was not the issue. They asked me at the beginning what do I want to achieve with this team. And, I replied that my only goal is to win gold medals at the World Championship and Olympic Games. I work for that, I live for that. There is no such thing as – very good fifth place. We train to be the best” stated Vercesi in an interview for Croatian media.

He believes that he Croatia will be only better and better:

“We didn’t have enough time for preparation, but I liked what I saw. I believe that we can be faster, play active defense for five sets… I joked with my players that with another week of trainings we could win against Brazil or Russia.”

Eight things to know when you search...

Challenge Cup W: Besiktas did it!