To say that Russia’s Ekaterina Gamova is on top of the volleyball world is something of an understatement. At 2.02m tall, the 2010 FIVB Women’s World Championship MVP towers over not only most of her rivals but most other sportswomen in the world; and as well as helping her country to two world titles and two Olympic silver medals, she has a list of individual awards as long as her arms – and those, as her opponents will testify, are pretty long. 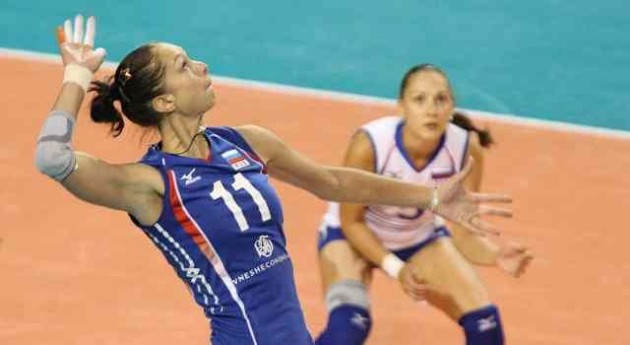 As if all that were not enough the 31-year-old from Chelyabinsk was recently named an FIVB Hero, in recognition of her ability to promote the sport of volleyball. In Macau for the 2011 FIVB World Grand Prix Finals she was asked why she thought she had been selected for this elite group.  “This is a very good question!” came the reply. “I have asked this myself and I couldn’t find an answer. I can just tell you that I am extremely honoured and pleased to be chosen. This is not only a tribute to the Russian volleyball team, to all the coaches I had, but to my family as well who brought me up.”

Indeed it was her aunt, Lubov Gamova, who was the inspiration for the young Ekaterina. “She was my first coach,” said Gamova “She took me to a special sport school where I could have played basketball or handball, but I chose volleyball instead.” Her progress was rapid: at the age of 16 she joined the Uralochka Ekaterinbourg club, and two years later she was representing her country at the 2000 Olympic Games. With Uralochka and then Dynamo Moscow she won six Russian titles before joining Turkish side Fenerbahçe Acibadem in 2009, winning the Turkish League and finishing second in the 2010 CEV Champions League.

Now plying her trade as an opposite back in Russia with Dynamo Kazan, the erstwhile outside hitter has been a permanent fixture for the national team for the past 10 years, winning European and Grand Prix titles, and it was Gamova – outstanding throughout the tournament – who notched the winning point for Russia in last year’s epic World Championship final against Brazil. “It didn’t mean anything special to me,” she insisted. “It just happened that I was receiving the decisive balls and I converted them. I was overwhelmed with the victory of the team, but not by my own performance.”

Her modesty is reflected in a pragmatic view of success and failure. “At every stage of one’s life there is an important day, victory or event that we remember forever,” she said. “Sometimes this is something really good, sometimes something really bad. Examples for me were the fine victories at two consecutive World Championships, while of course my greatest disappointments occurred in two Olympic finals [Sydney 2000 and Athens 2004] where we were so close to getting the gold medals.”

When asked about her sporting idols, Gamova’s reply gave an insight into her own sporting psyche. “I don’t have any idols but there are people I have a high regard for in sport,” she said. “I admire their behaviour on the field, court or ring, their achievements and abilities, or the sheer determination to reach their goals – all those qualities which help one to reach and stay at the top. The [triple Olympic gold medallist] wrestler Alexander Karelin and the [former world and Olympic champion] boxer Alexander Lebziak come to mind, and of course a number of former volleyball players.”

Gamova also admits to being superstitious. “I always play with the number 11 on my jersey, and this [has been the case] for at least 11 years now,” she said. “It is, of course, a superstition but if I stay next to our team captain Maria Borisenko at the official pre-match lineup or sit next to her before the match, this brings us luck – at least, we believe in that,” she added, laughing.

Gamova will be hoping to make a fourth attempt for that elusive Olympic gold medal in London next year, but she sees her future very much wrapped up in the present. “Volleyball is my life,” she said. “It is a sport which can strengthen your character, make you want to achieve something and teaches you to overcome difficulties. Without volleyball there would be no meaning in my life; it is both my job and my love. This is something I cannot live without, and I will try to play as long as possible!”

Volleyball rules (but the unwritten ones)