The award-winning Scavolini Pesaro, that finished the Italian championship on a disappointing 7. place, wants to forget the bad season 2011-2012 and so started to strengthen. 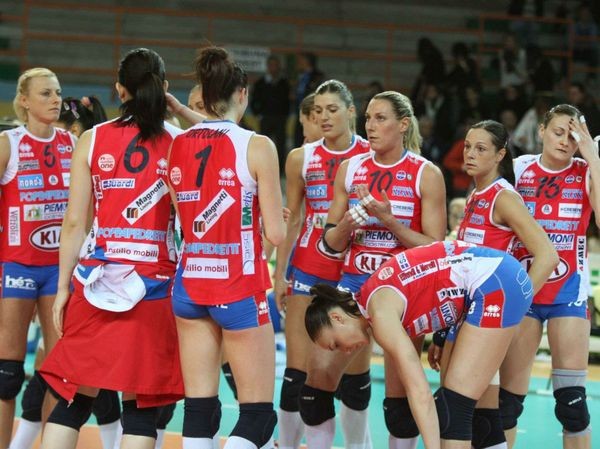 Team-managers extended contract with American very successful outsider hitter Alexandra Klineman (who has closed her first season in Italy with a 39.6% in attack) for another season, in spite of she had many proposals from abroad; “Siamo molto contenti della sua decisione” (we’re very happy about her decision) said the vice president Sandro Sardella.

Other players who will stay in Pesaro for the next season are Italian national team opposite Serena Ortolani (who had a very disappointing season), strong libero Monica De Gennaro (who has been the best receiver for this season) and middle blockers Elisa Manzano and Berenika Okuniewska.

Pesaro is then looking for a substitute for German national team outside hitter Maren Brinker, who did not come up to club steward’s expectations. There are also many indications that Italian setter Francesca Ferretti will leave Pesaro, as she decided to change the climate; there are interesting propositions for her from Piacenza and Villa Cortese (it’s certain that American national team setter Lindsey Berg, who played for Villa in this season, will play abroad next year).

Will Scavolini Pesaro be able to return to be that strong club that won the Championship of Italy 3 times in a row from 2008 to 2010?