Match between Dinamo KAZAN and Chemik POLICE turned into a dramatic clash of five sets, but at the end of the day the victory was claimed by the reigning Russian, European and world champions from Tatarstan. 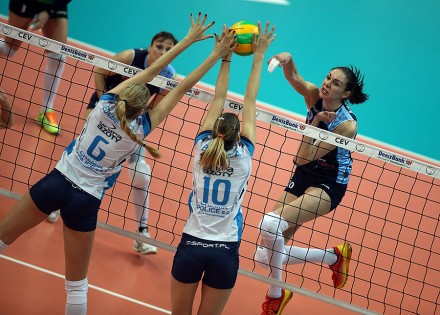 Elena Yureva, middle blocker of Dinamo KAZAN:  “That was a very nervous match.  We have a very strong pool and it was a must-win match.  I think it is the psychological pressure that prevented us from winning the 3 points.  At some point there were four Serbs on the court and I told the girls that we were playing against the national team of Serbia.  It was hard to play because they are indeed very talented and strong, both mentally and physically.  They jump high, attack high, block high. But we made it, after all: the Russian block outplayed the Serbian one.”

Giuseppe Cuccarini, head coach of Chemik POLICE:  “It was a real show for the spectators, and I am sure they have really enjoyed it.  Both teams played very good, high-level volleyball and spared no effort to win the match.  Unfortunately, we faced some problems in the tie-breaker while Dinamo played better.  They showed all their experience and proved why they are the champions.”

Play until the ball falls (VIDEO)

Improve your skills with this stability and...

WL: WoV had a special present for...