This season the team from Trento did only one transfer in regards to the last year. They signed a contract with a young Greek middle blocker that now plays the principal role in the team. 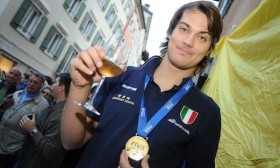 He made 17 points in sum: 4 blocks, 5 personal aces and 8 forceful attacks with 67% of efficiency.

Such a stable game of young player helped the team of current Italian Champions to win over the 2nd team in Italy and, at the same time, showed that he is one of the players on court that the setter can always count on.

After few months spent in the strongest league of the world he has worked out a solid position in the club.

He is still young and inexperienced, but he has someone to learn from – Emanuele Birarelli – an excellent middle blocker who played many matches in the national team, now the 5th season in Trento.

From the 1st match in Serie A1 Sustenium he made 75 points: of which 9 in service and 21 in block.

New force has appeared in the Italian Volleyball League.

Greece: Iraklis and Olympiakos stayed at the top

PAC U23 W: Dominican and Colombia for...